(Clearwisdom.net) There is an information booth for the French "Quit the CCP Service Center" in an area under the Eiffel Tower in Paris, France. On October 2-3, 2010, the Center invited the European Divine Land Marching Band to take part in a two-day activity to support the 80 million Chinese people who have quit the Chinese Communist Party (CCP) and its affiliated organizations. 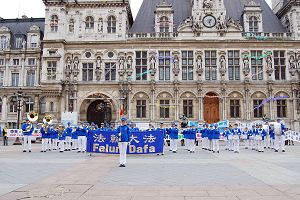 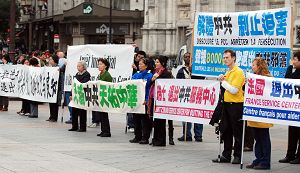 Banners displayed at the assembly 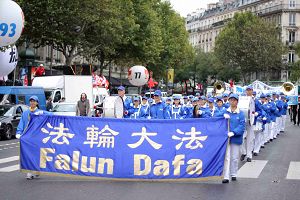 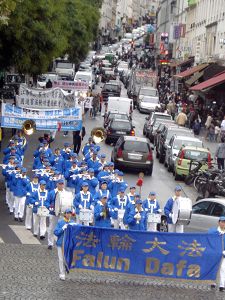 The parade, through the Chinese residential area to the Hotel de Ville (City Hall)

On Saturday, Falun Gong practitioners held a parade, which passed through the Place de la Republique, the Chinese Business Street in the Third District of Paris, and arrived at the Hotel de Ville (Paris City Hall). Another parade in the afternoon started from Italy Square and then passed Avenue Choisy and Avenue d'lvry in Chinese District Thirteen, drawing the attention of residents and tourists. The practitioners carried banners in both French and Chinese, reading, "Heaven Eliminates the CCP and Blesses China," "Quit the CCP, Stand On the Side of Justice and Conscience," "Join the CCP with a Foggy Head and Quit with a Clear Mind," "Heaven Is About to Eliminate the CCP," and, "Quitting the CCP will Keep You Safe." Many people took flyers and other informational materials handed out by practitioners along the parade route.

On Sunday, a rally was held under the Eiffel Tower. The European Divine Land Marching Band performed a number of selections, including, "The Fa Rectifies the Cosmos." Among the audience were tourists from Mainland China and all over the world. The performance was greeting with applause and cheers.

The organizer of the activity, Mr. Chen, said at the rally, "Chinese people were kidnapped by the CCP for 61 years and suffered badly. With falsified statistical figures, the CCP deceived the people and governments around the world. The CCP has persecuted the Chinese people in all its past political movements. It killed students in the Tiananmen massacre of 1989 and started to persecute Falun Gong in 1999. The CCP hasn't yet stopped the persecution of Falun Gong now. Even worse, it harvests the organs of living Falun Gong practitioners and sells them for profit. It is only when all Chinese abandon the CCP, that the Chinese people will start a new life."

Ms. Pan, a volunteer for the Quitting the CCP Service Center in Geneva, also addressed the rally. Ms. Pan said, "In the past sixty years of political movements and propaganda, using lies and deception, the CCP has brainwashed all the Chinese people. Nowadays, the CCP is facing the bad result of its cruel regime. The great tide of quitting the CCP, resulting from the publication of the Nine Commentaries on the Communist Party is growing at a pace of 50 to 60 thousand people per day. Eighty-one million people have quit the CCP and its associated organizations. Now is the time for everyone to join this overwhelming, great tide, which provides the historic chance to transform to a new China peacefully."

In addition to the live speeches, several recordings were played at the rally. Lots of tourists from Mainland China listened to the messages and read the display boards carefully. They agreed with the volunteers after hearing why Chinese people should quit the party. More than a hundred Chinese tourists declared their withdrawal from the party, some of whom said emotionally, "Thank you!"

A tourist from Mainland China said, after quitting the party, that in China people were depressed because they were without freedom and human rights. He said, "The pressure of living there is huge. We are restricted and suppressed. There are human rights here. In China there are no human rights. The police can arrest you under any circumstance and say you committed a crime even though you didn't. The CCP suspects you for no reason. They arrest you first without evidence and beat you. They torture you both physically and mentally until you admit you committed a crime. The people are slaves without the rights granted by heaven, aren't they?"

The Paris Quitting CCP Service Center was established in 2008. It has helped tens of thousands of Mainland Chinese tourists quit the CCP after they learned that the 61 years of the CCP's history is full of persecution of the Chinese people and destruction of China's culture, and that only after quitting the CCP and dissolving it can the Chinese nation have a bright future.