Australia: Supporting the Chinese Withdrawals from the CCP (Photos) 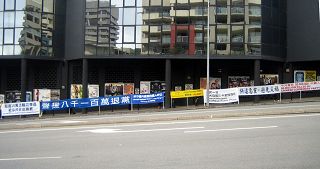 The great wall of truth

The attendees held an activity called "The great wall of truth" in Chinatown, Brisbane. They held banners about quitting the party and attracted a lot of attention from tourists and local citizens. Many volunteers from the service center said that more and more Chinese tourists are willing to talk to them and consider quitting the party. Ms. Zhong, a volunteer, said: "I know that many Chinese are afraid of the CCP. I have sympathy for them. I hope that they will understand that China is not equal to the CCP. I hope they will wake up and recognize the evil nature of the CCP. I hope they will quit their memberships and create a bright future for themselves." 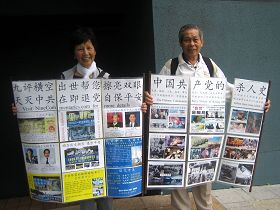 Mr. and Ms. Xu, volunteers from the service center

Mr. and Ms. Xu, volunteers from the service center, often come to Chinatown to pass out flyers, clarify the truth about Falun Gong, and convince people to quit the party. Ms. Xu said: "We don't force people to practice Falun Gong, of course. But we want them to know that Falun Gong is good and the world needs truthfulness-compassion-forbearance."

Ms. Lin is also a volunteer from the service center. She believes that everybody has a compassionate nature, so after learning the truth nobody is willing to take the opposing side. "We have been trying to tell people the truth of Falun Gong and the brutal history of the CCP. When people learn the truth, many of them are willing to quit the CCP, because people want to be good," Ms. Lin said.