(Clearwisdom.net) October 1 was the day that the Chinese Communist Party (CCP) took power. Falun Gong practitioners in Macau went to Walking Street, a busy avenue, to explain the facts and expose the CCP's crimes over the course of three days. They distributed copies of the Nine Commentaries on the Communist Party and helped Chinese people to renounce their memberships in the CCP and its affiliated organizations. 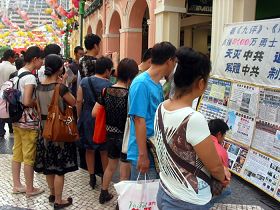 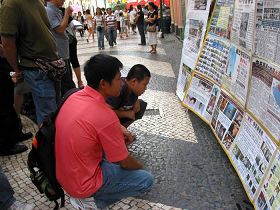 On October 1, the practitioners assisted around 300 Chinese tourists to announce their resignations from the CCP and its affiliated organizations. Many of them were young people. Previously, most of those who quit the CCP were middle-aged Chinese. Recently, more young people are withdrawing from the Party. Some parents brought their children to see the photos, and then the whole family denounced the CCP.

Several Chinese tourists announced, "Falun Dafa is great!" or "I hate the CCP." The practitioners were delighted at Chinese people's awakening. 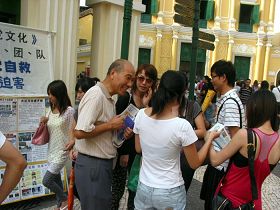 Young people listen to a practitioner explain the facts 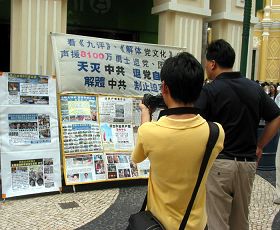 “Forcing a Son To Denounce His Own Parents, Chengdu City 610 Office Uses Methods Not Seen Since the Cultural Revolution”