Computer Programmer from Romania: "I Have Found the True Meaning of Life" (Photo)

(Clearwisdom.net) Seven years ago, doctors told Kuki that he would lose his eyesight within two years. But seven years have passed, and Kuki, without taking any medicine, and without wearing glasses, can see very clearly. In the many years that Kuki had been married, he didn't want to have children because he was filled with anxiety about the world they would be growing up in. He felt that he had no way to undertake the responsibility of raising children, and he didn't want to bring them up in a world where they would be surrounded by violence and corruption. But now he has a lovely daughter, and because he has found the true meaning of life, he has seen hope in society changing for the better. 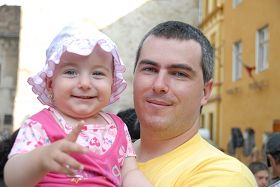 Kuki and his loveable daughter

A sufferer of glaucoma sees hope

These changes all occurred because Kuki began to practice Falun Gong five years ago. Kuki is Romanian and is a computer programmer. He enjoys working at his computer round the clock. He found out that he had glaucoma, and that the intraocular pressure in his eyes was high. He was told that he may become blind. With poor vision, he had no way to work, yet his family still had to depend on his earnings every month to pay for the rent.

He visited doctors everywhere, looking for a means of treatment. In the city where he lived, he saw over ten doctors, and also traveled to the capital city to see more. He even went abroad to seek medical treatment. But there was not one doctor who could tell him the real cause of the illness and how to cure it. Under enormous pressure, he was nervous and apprehensive, and gave up hope, and started to look for another solution. He started to try qigong and yoga as well as meditation, and read many books. He could feel that meditation could alleviate the intraocular pressure, but he said that he didn't understand what the yoga books meant.

Finally, a friend recommended Falun Gong. When Kuki saw that Falun Gong included meditation and was based on Zhen - Shan - Ren (Truthfulness - Compassion - Forbearance), he felt that it was very good.

He started to read the book Zhuan Falun. He, who placed much importance on logical thinking, felt that he had found a true science in the book: "After reading the book, I felt that this definitely opened up the whole world to me, all the possibilities unfolded before my eyes, and many things, and I felt that this was true science."

"My thought upon reading it for the first time was that this is certainly a very good book, but after reading it I didn't have an impression on the structure of it, and had no way to share it with people. After reading it for the second time, many words were Chinese, and I didn't know what the relation between them was. I noticed how it says that one should read the book many times, so I began to read it repeatedly."

He soon felt that his entire world had changed for the better. From the time he was small he was often picked on by others, but he didn't wish the same upon others, so when he was very young he started to think about how to make this society harmonious and peaceful. The way he saw it, life was very difficult, and if one just lived blindly, without knowing the meaning of life, that would make things very painful for people. "During this period of time I felt that there was no meaning to life. In the beginning I wanted society to change for the better, but what made me sad was that there was no way of doing so. When I read the book Zhuan Falun I thought, now I know what to do. Only through upgrading moral standards can society change for the better. When the whole world has changed, when you change your view, and when you look upon the world in a different way, you can say that the world has changed. I'm not afraid of going outdoors any more, and not afraid of conversing with people, and I'm not afraid of this sort of thing. I have become optimistic, and have found the meaning of life."

Kuki began to change. "Before I am about to say something that might hurt other people, I think it over. Before I used to think that I am independent and don't need other people. Now I avoid harming other people to the best of my ability, and I have realised that this has a lot of value, and for me not letting other people get hurt has a lot of meaning to it." He didn't argue with his wife any more after that, neither did he think that it was her problem and that it was nothing to do with him when coming across problems. He started to consider her and other family members, and to give them an environment in which they could feel comfortable.

In his work, he also changed his attitude. Before he would intentionally show off about some things he could do in front of his project supervisor, and in his mind he would think, "You can't do it, but I can." After practicing cultivation, he realised that this was not good. "This was an attachment of mine - I was hoping to validate myself. Now I know this is not good, and I am trying to encourage everyone, trying to have everyone put forth a surge of effort, and in this way they will do even better."

Kuki, who had never thought of having children before, became a father after practicing cultivation because he finally had confidence in society. He was now confident that he could undertake the task of bringing up a child, and that he could give the child a good living environment. Especially after practicing cultivation, he realised how precious life was, and now he has a loveable daughter.

Along with his cultivation practice in Falun Gong, he had come to understand more and more about changing himself for the better according to Truthfulness - Compassion - Forbearance, and he felt that he didn't need to use any medicine to treat his glaucoma any more. Five years have passed, and his eyesight has gone back to normal and he doesn't have the worry of glaucoma any more.

Talking to Others About Falun Gong

When he had just started to practice cultivation, he saw news about the persecution that Falun Gong was suffering in mainland China, but he felt that this was not related to him, because he had only just started to practice cultivation. But after coming to understand more about Falun Gong, and after meeting even more Falun Gong practitioners, he changed: "This is good people being persecuted, it's simply mad. So I started to think about how I could help, and how to stop this irrational persecution."

When Kuki, who had himself lived under the rule of an evil Communist government, read the "Nine Commentaries on the Communist Party" he gained more understanding about the evil communist party. He realised that although there is no longer a communist government in Romania, that some people still live in its evil shadow. For example, some people are still worried about whether spies will report them to the authorities for speaking out in public. To enable more people to see clearly through the evil communist party, he and other Falun Gong practitioners held a Nine Commentaries on the Communist Party Seminar in the city in which he lives, and the mayor came to speak. He recollected the situation when Romania was under the rule of the evil communist party.

He also tried his best to enable more people understand what Falun Gong is, and to understand the persecution that is happening in China. In his view, the persecution that is happening in faraway China is also related to Westerners. Many people ask him, "Why are you so concerned about what is happening in China? Aren't our own problems enough?" He tells them: "It is just like what Martin Luther King said: 'Injustice anywhere is a threat to justice everywhere.' If we accept this infringement upon human rights, and accept this enslavement, perhaps one day we will also be enslaved."

Kuki hopes that this persecution will soon end and that the world can become more harmonious. Not only is it for ourselves but also for our future generations. He believes that if everybody can make some small effort, it could bring about significant change in the world.

“Japan: Passerby on the Streets of Nagoya: "I Hope the Persecution of Falun Gong Will Soon Stop" (Photos)”