(Clearwisdom.net) On October 5, 2010, the Vancouver City Council approved a proposal for establishing a bicycle lane on Hornby Street. Gerry McGuire, the owner of a local limousine service, proposed naming the bike lane "Falun Gong Lane," and others present at the meeting agreed with him. 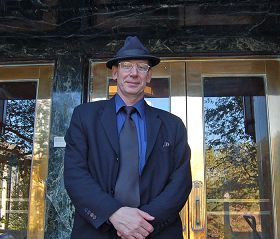 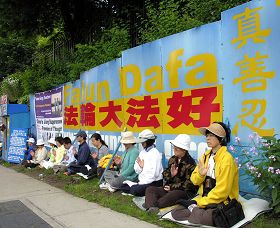 Falun Gong practitioners in front of the Chinese Consulate

McGuire said that the name will give the lane a positive meaning, and help to promote the values of freedom and respect for beliefs.

He said that respect for others, freedom, and democracy are universal values, and torturing people for their beliefs is not tolerable. Everyone agreed, and he then suggested naming the lane "Falun Gong Lane" to show support for human rights.

After the meeting, some members of a local bicycle association shook hands with McGuire, expressing their support for his suggestion that promotes the values of human rights. A city council member also expressed the same opinion.

McGuire often drives by the Chinese Consulate in Vancouver, where he always sees Falun Gong practitioners peacefully protesting the persecution. Each time he passes by, he honks to show his support.

He agrees with the principles, "Truthfulness-Compassion-Forbearance," and condemns the persecution of beliefs. He said that many people in Canada are close to the Chinese Communist Party and ignore human rights, and he hopes that naming the lane after Falun Gong will remind those people of the importance of human rights.

“Getting Rid of the Mentality of Competitiveness and Forming One Body”