Recalling Master's First Lecture in the US

(Clearwisdom.net) I began to practice Falun Dafa on February 6, 1996. I was very fortunate to attend Master's first lecture in the US on October 5 at Ortega Park in Sunnyvale, California. 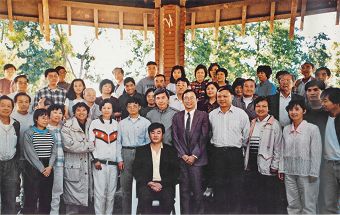 Picture of Master and practitioners in San Francisco Bay Area, taken on October 5, 1996. (This is one of the many photos taken that day. Master posed for separate pictures with each group.)

It was a day that I will forever remember. On that sunny day with a clear sky, many birds came and happily sang while perched on trees around the pavilion. The surroundings of the pavilion were immersed in red light. Master looked young and handsome. His every word penetrated deep into my heart, echoing inside my body. The excitement and happiness was beyond description. I applauded so many times that my hands went numb for a while. This laid a good foundation for my cultivation later on.

The night that I began my cultivation, I suddenly saw a giant eye. Two days later, my celestial eye opened and I saw a Falun (law wheel) rotating. On the fifth day, I felt Falun revolving in my lower abdomen. As I understand it, Master has installed a Falun for all of us and they are directly connected to Master himself. In fact, during experience-sharing conferences, I could always feel the Falun quickly rotate in my lower abdomen before Master appeared. Some other practitioners report similar experiences. Many practitioners' celestial eyes were opened and some even had supernormal abilities. These supernormal abilities were not obtained from pursuit, but were often given without us knowing it. In Lecture in Sydney, Master said, "natural attainment without pursuit". This is indeed the case.

"That is why it's said that always cultivating as if you were just starting will surely result in achieving your ultimate rank."

In the early days of cultivation, practitioners had determination and sincere faith in Dafa and Master, which kept us diligent. Because of our diligence, Master gave us lots of gong potency and supernormal abilities. After my celestial eye was opened, I saw beautiful scenes in other dimensions, in addition to high level beings. As my main consciousness flew in the sky, I saw my previous reincarnation cycles, my relatives in China (although I am in the US), astronauts working in space stations, etc. Sometimes while sitting, I saw high level beings passing by me. Inside me I also saw the Immortal Infant and Cultivated Infants, as well as my five para-consciousness (three males and two females). I also heard music from other dimensions. Every now and then, Master did guanding to me. Everything was so real.

I often told other practitioners that every word in Zhuan Falun is the truth. In fact, every word in Zhuan Falun has countless layers of profound meaning. The more we read Zhuan Falun, the more Fa-principles we will be enlightened to. In this way, we will improve our xinxing and obtain support by high energy gong which transforms our body. Some people may feel this during the process, while some may not feel it so strongly. Nonetheless, we have to pay attention to Fa-study since it is indeed very important for us.

My understanding is that doing the exercises is part of cultivation in addition to Fa-study, but it is not easy to really calm down and study the Fa. When studying the Fa, we should focus on Dafa books and not be distracted by others. Only by calming down can we assimilate to the Fa, and improve via both mind and body. Only then can our body be transformed maximally and experience the state described in Zhuan Falun during the sitting mediation. On the other hand, if we have an attachment to pursuit in our mind, it is hard to enlighten to more Fa-principles.

Master has countless Fashen. This is also indeed true. One practitioner has a 6-year-old child, who often points at my rotating Falun, mimicking it. Wherever we go, Master is always by our side to help us and protect us. I have experienced four car accidents in the past. One of them was prior to July 20, 1999, and it was to pay a karmic debt, the other three were after July 20, 1999 and I believe that they were caused by evil beings that wanted to persecute me. Three out of the four accidents happened on a highway and one of them on a local road. During all four, the car was damaged, but I was fine since Master was protecting me. Once a woman in her 30's lost control of her car and headed directly towards me. Other practitioners experienced similar situations. One practitioner's car was hit by a heavy truck that bypassed a red light. Her car was ruined and the driver side was severely deformed. However, she was fine and was just unable to get out of the car. The police officers could not believe what happened. Apparently, Master was taking care of her.

Prior to my retirement, I participated in many Dafa activities in the US and Canada, in addition to truth-clarification by sending faxes, making phone calls, etc. After my retirement, I spent time on distributing the Nine Commentaries on the Communist Party, clarifying the truth to relatives and friends in China, asking them to quit the CCP and affiliated organizations, as well as mailing truth-clarification materials. I also put up posters and distribute materials to promote Shen Yun performance and delivered Epoch Times newspaper all year round.

In the past 14 years of cultivation, no matter how much I have done to validate the Fa or what supernormal abilities I had developed, I always looked within to rid myself of egotism. I think zealotry is one of the biggest hindrances for looking within and it is difficult to let go of. By getting rid of selfishness, we will be able to let go of attachments of showing-off, conflicts and other various attachments.

When examining myself, I often consider other practitioners cultivating better than me. I often pay little attention to the shortcomings of others. As an elderly practitioner, I was sometimes looked down upon by others, or ignored. I took them as good opportunities for me to look within and improve. In order to improve during ancient times, a cultivator was required to wander around in society to suffer from hunger and all sorts of mistreatment. Now we have many good opportunities to improve when cultivating in Dafa. Only by letting go of bad substances can we improve.

It has been 14 years since Master gave the first lecture in the US. By sharing some of my experiences and understandings, I want to express my gratitude towards Master.