Western Practitioner: “The Best Thing I Have Ever Done Was Acting for the Sake of Others” (Photo)

(Clearwisdom.net) Recalling her trip to Tiananmen Square during the Chinese New Year in 2002, Ms. Annett Munter thinks it was one of the best things she has ever done. Annett recently traveled to Manhattan's Chinatown in September of 2010, joining Falun Gong practitioners from all over the world. They demonstrated the exercises to show the wonderfulness of Falun Gong, held banners and displayed posters exposing the Chinese Communist Party's (CCP) persecution of the practice. Annett's wish to stop the CCP's persecution is as strong now as it was back in 2002 when she went to Beijing to appeal. 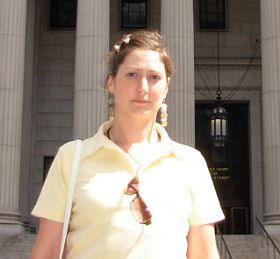 In 2006, Annett learned from media reports and from independent investigations that Falun Gong practitioners were being killed for their organs to supply the CCP-sanctioned lucrative organ transplant trade.

Besides that, her friend’s mother-in-law suffered from illegal detention in China, simply for practicing Falun Gong. During the detention, the elderly practitioner underwent blood tests; other practitioners had their skin cells tested. These tests were not done out of concern for the detained practitioners’ well-being; instead, the CCP did them to set up a live organ donor bank.

“There is no doubt that it (the organ harvest crime) must be stopped at once; it shouldn’t have happened at all. Everyone has his or her own life. We should cherish our lives, and cherish others’ lives at the same time. No one has the right to do this evil thing. I joined the march, hoping that everyone will become aware of this issue, and politicians in a position of influence and people from all walks of life will take notice so that this evil organ harvesting crime can be stopped. I also hope those who committed this evil crime will be subject to criminal penalty.”

Annett learned about Falun Gong in 1998 from an article in a German magazine, although the article had been published in 1996. It stated that a German journalist traveling in China saw many people doing the exercises. His article briefly introduced Falun Gong and described how people may learn to practice. Inspired by the report, Annett ordered Falun Gong books and began the practice.

Ten years later, Annett doesn’t remember every detail of her experiences since beginning the practice, but she still remembers her family members' deep appreciation of her recovery from stomach illness and becoming healthy after practicing Falun Gong. Several months later her family members also began the practice. All of them experienced better health as a result. Since then, they got along better and family conflicts were rare.

Her brother’s change after practicing Falun Gong was most memorable. “My brother was a drug addict before practicing cultivation, but three months after practicing Falun Gong he dropped all his bad habits. He no longer smoked or took drugs, realizing from the Fa teachings that such behavior was bad for him - and an addiction that could control him. After my brother understood this, the Fa empowered him to get rid of those bad habits and completely changed his life.”

Annett’s sister-in-law had developed bulimia. Practicing Falun Gong for only two weeks made this illness disappear. “My sister-in-law had visited many doctors, to no avail. Nothing could stop her symptoms, nor cure her. She became emaciated and her life was in danger,” Ms. Annett said in tears, “Two weeks later (after practicing Falun Gong) she suddenly stopped vomiting, as if she was reborn.”

A Call from the Heart in Tiananmen Square

The CCP began the persecution of Falun Gong in 1999, a year after Annett and her family had begun cultivation. She could not comprehend the reason for the persecution, and why people could be persecuted simply for their values and beliefs. She still clearly remembers how she felt when she became aware of the persecution, “Very shocked. I felt as if someone put a knife in my heart. I felt badly hurt. It was incomprehensible to me how Falun Gong could be misunderstood that way; it was completely impossible. Falun Gong is just about practicing the meditative exercises and following the principles of Truthfulness-Compassion-Forbearance. There is no good reason to oppose it.”

Annett learned more and more about the practitioners' suffering from persecution in China - being illegally arrested while peacefully practicing the exercises in the parks and prohibited from appealing for justice. The CCP did and still does control all media in China. The media could only report what the CCP told them to publicize, including spreading lies. Annett hoped that she could speak out for the practitioners.

She arrived at Tiananmen Square during the 2002 Chinese New Year, planning to shout from her heart “Falun Dafa is good! Restore Master Li's good name! Stop the persecution of Falun Gong!” Before leaving Germany her Chinese friends taught her the phrases in Mandarin. She ran in Tiananmen Square and shouted the three sentences.

Annett talked about how she felt before she left, “Yes, I was very afraid. But my righteous thoughts and my hope for justice were much stronger than my fear. We were there peacefully letting people know that Falun Gong is disseminated worldwide, and the oppression and ban of the practice only happens in China. We were there to let Chinese people know that Western people were aware of the persecution, and that the persecution should be stopped.”

As with other Western practitioners at Tiananmen Square who shouted “Falun Dafa is good,” Annett was likewise beaten and kicked by the police. “Police agents kicked me without saying anything. They not only beat and kicked me, but also grabbed me by my throat. I heard many practitioners crying out. The face of one beautiful girl became dark red from the police grabbing her throat.”

Twenty-two hours later Annett and other Westerners were expelled from China and put on a flight to Germany. To avoid public exposure of the arrests, the CCP used tax money to buy airline tickets for the Western practitioners, although they had their own return tickets.

Annett, recollecting, said firmly, “I think that trip to Tiananmen Square was the best thing I have ever done, because I was acting for the sake of others rather than only myself.”

She has been involved in many activities for the past ten years to help stop the persecution and will continue her efforts to bring a stop to the evil CCP’s deeds. She plans to put her experiences in writing, so that more people may understand the truth about Falun Gong, adding, “I will never stop [working against the persecution] until the persecution ends.”