(Clearwisdom.net) The European Organ Donation Congress of the European Transplant Coordinators Organization (ETCO) was held in Cardiff, Wales, from September 24 to 26, 2010. The Chinese Communist Party's (CCP's) organ harvesting from living Falun Gong practitioners received widespread attention from ETCO, organ transplant experts, scholars, and Cardiff media. The annual Congress of the ETCO used to invite doctors from China to participate. However, since the CCP's atrocity of organ harvesting from living Falun Gong practitioners has become widely known, the Congress refused to invite Chinese doctors this year.

The Cardiff Radio Broadcasting Station interviewed three Falun Gong practitioners on September 21: Annie Yang from China and Amy, and Peter from Cardiff. Annie recounted her personal experiences in a CCP forced labor camp. Amy told how her sister in China died as a result of the CCP persecution.

Annie was imprisoned in a forced labor camp for two years by the CCP for practicing Falun Gong and almost lost her life. She was rescued by overseas Falun Gong practitioners and the British government. However, her experiences in the labor camp remain a lifelong nightmare. Annie said, "We were given only half of a steamed bun every day in the camp. We were forced to sit on high plastic stools and were forbidden to move. We had to meet the sitting requirements: feet together; backs straight, hands on knees, and no blinking. I was forced to sit like this for as long as 20 hours a day. I had to ask for permission to drink water." Annie didn't realize the purpose of the medical exams she was given in the labor camp until the CCP's crime of organ harvesting from living Falun Gong practitioners was exposed internationally. She said, "They wouldn't let us know some people were taken away and their organs were harvested. But we had all kinds to detailed medical exams in the labor camp, including blood-draws, chest X-rays, eye exams, etc. I didn't know why we had to have these exams because they did not seem concerned about my health, even depriving me of my basic human rights in order to try to force me to give up my belief."

Mr. Big Scott, the moderator of Cardiff Radio Broadcasting Station, said in the program, "I am sorry. It is hard for me to believe that it occurs today, but it is indeed genocide." He said it reminded people of things that occurred during World Wars I and II and that those who wish to seek and find spiritual belief should never be persecuted or forced to lose vital organs. He said everyone has the right to choose his own spiritual path and no regime should be allowed to restrict that right. 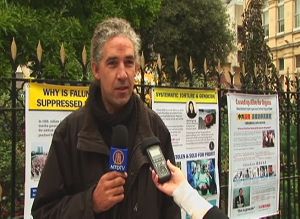 Mr. Big Scott, the moderator of Cardiff Radio Broadcasting Station, said he could not tolerate the genocide occurring today and he would inform others.

On September 24, the opening day of the Congress, Mr. Scott went to downtown Cardiff especially to sign the petition form at the practitioners' table, calling for an end to the CCP's live organ harvesting from Falun Gong practitioners. He said he could not tolerate the genocide occurring today and he would let more people know of the true situation.

Mr. Eduardo Barroso, Director of the General Surgery and Transplantation Department, Curry Cabral Hospital, Portugal, said, "I went to Beijing to attend a conference on liver transplantation. I asked about the live organ harvesting and said that such a thing would only be done by Nazis. The situation was very awkward. I believe that they all knew the truth. They appeared very afraid and did not like to talk about it." 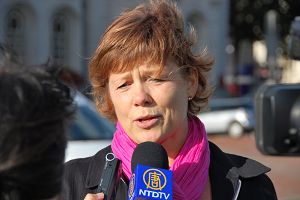 A lady from Denmark Organ Transplantation Center said, "It is hard to believe that China has a such a rich source of organs. No country can do that. It is against organ transplantation procedure."

A lady from Denmark Organ Transplantation Center was surprised at the one-week wait time in China for organ transplantation. She said, "In Denmark, 80% of the people say that they wish to donate their organs upon their death. Even so, the wait time is still several years or even longer. I have never heard of any other country where the wait time for organs is one week. To me, it is very suspicious."

During the conference, Falun Gong practitioners in the UK held an activity in downtown Cardiff to expose the CCP's organ harvesting crimes and collected signatures to stop it. 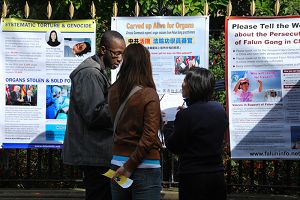 People in Cardiff learn about the CCP's live organ harvesting.

Many people signed to support the practitioners' efforts to stop the persecution. Someone said to a practitioner, "You are doing a great thing for humanity. You have done a good job! You must keep going." A young man watched attentively while a practitioner demonstrated the Falun Gong exercises and said, "I feel her inner determination and the power of Falun Gong. The CCP cannot sway you."