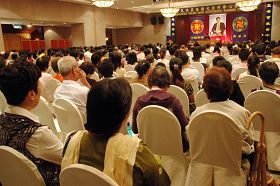 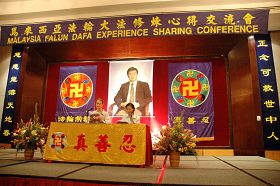 Thirty-four year-old practitioner Afan previously had many bad habits and bad friends. His wife tried to divorce him. After nine months of practicing Falun Gong, he quit most of his bad habits. He said, "Great changes happened to me in the last nine months. My body is stronger, and my evil nature is gone. I let go of a lot of attachments, which made my wife and son happy, too."

Ms. Zheng started practicing Falun Gong in 2004. She told how she clarified the truth to her coworkers. Due to the bad economy, her boss laid off many employees, and she was one of them. Her boss even said that she was laid off because she spreads Falun Gong among her colleagues. She was shocked. After she calmed down, she read the Fa and looked inward. She let go of the attachment and clarified the truth to her boss. Surprisingly, her boss's attitude changed, and the company's business got better almost right away. Now her boss is very nice to her.

Ms. Zhu started practicing three years ago, and Falun Gong healed her many diseases. She said, "It isn't easy for a person to obtain the Fa, so we should cherish this opportunity. I truly sense Master's benevolence. We should help Master to rectify the Fa." She said we should help fellow practitioners, if they slack off in cultivation.

Several practitioners shared their experiences of collaborating with others when clarifying the truth. Ms. Tang talked about how to eliminate jealousy and the competitive spirit. A Western practitioner from Switzerland talked about how she let go of fear and selfishness. She obtained the Fa in August 2008. When she first started, she could not do the sitting meditation for more than thirty minutes. A few months later, she could do it for an hour, but had great pain every time. One day she realized that she should eliminate the angry thoughts that she had developed in everyday society. When she tried, she found that the pain in her legs also went away during meditation. She realized that what is key in cultivation is letting go of attachments.

The conference concluded successfully at 5:00 p.m.

“Breaking Through the Fear of Clarifying the Truth to Strangers”