Mr. Goodwyn described the show as "Beautiful. A lot of activity and well-coordinated."

He added, "This is the third year I've seen this show. So tightly produced. I appreciate this. I've done a lot of shows here on this opera house stage, both backstage and reviewing them, and so I see how tightly produced this is," he said. "The projection screen is a marvel," he continued. "The maidens, for instance, flew down out of the projection and came on stage in real life."

Mr. Goodwyn felt inspired by Shen Yun. "As a director and stage manager, [I think] the choreography is wonderful. I love to see tight choreography like that. I counted, they're something like 26 dancers all on stage at once. They moved exactly in time. That's great--it's hard to do," he said. "This is a glorious way to [celebrate the New Year]--this is better than champagne and fireworks."

Lucy was noticeably touched by Shen Yun. She expressed her wish that human rights in China improve. "There's such a difference between right and wrong out there. It just makes me cry. It's so good that you're bringing the message out in such a beautiful, incredibly beautiful way [crying a little]. It's certainly caught my attention and awareness. It's so key to be aware. It's a good thing. Thank you so much [cries]. When I saw the mother being taken away and the little girl ("Nothing Can Block the Divine Path"), and the man with the banner and at the end ("Astounding Conviction"), it's just really heartfelt and very warmly received. I just love all the detail and the energy and thought and passion--all of the details."

Among the theatergoers, and the last to leave the theater, was Diane Petersen, a former professional ballet dancer and dance studio owner, and Mr. Domun, a general contractor.

"I was really impressed with the choreography, the way [the dancers] intertwined during the dances. What was interesting to me [was] that there were so many people on the stage, 21 at a time, and yet the way that they intermixed all the dancers, doing different things, yet putting it together nicely. Obviously, they go off stage, but it was really, really amazing how many people could be on stage and be together with all the choreography, and it was beautiful." Diane also appreciated the authentic props and the way that those props were used in each routine.

Mr. Donum said he was "very impressed with everything, especially the costumes, very colorful, very vivid, pretty amazing!" He thought the music was "awesome" as well.

The couple was also surprised by the state-of-the-art computer generated backdrops, which allowed the audience to experience ancient China firsthand. Diane enjoyed them. "I've never seen anything like that before. I was very surprised to watch the person on the screen coming onto the stage."

"I was impressed with that as well," Mr. Donum interjected. "It wasn't just a backdrop of a scene that didn't move. There was action there."

Close the Schools One Day So Younger Generation Can See Show 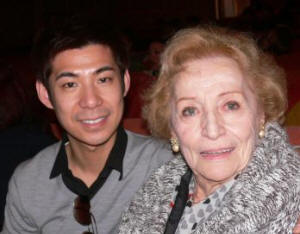 Back in 1976, Mrs. Ross took a group of 70 students to China. She says that there is a lot about China that people know nothing about "behind those hills that we see on the screen."

As a youth, Mrs. Ross danced under the direction of a Russian dance teacher, so she was very partial to the performance. "I love classical dance," she said.

"I am delighted to be here," she said, adding that she thought schools should close for a day so the younger generation could all come see the show. "It is everything--all the disciplines are there. This show is outstanding."

“Husband of Falun Gong Practitioner Dies as a Result of Persecution”