(Clearwisdom.net) On the afternoon of January 1, 2010, Zhang Kaichen, Director of the Liaison Branch of the Propaganda Department, Shenyang Chinese Communist Party (CCP) Committee held a press conference in Flushing, New York and renounced the CCP in public. 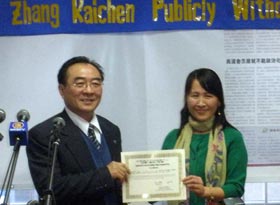 As an official in the CCP's propaganda department, Zhang Kaichen knows well the Party's methods in the persecution of Falun Gong. Mr. Zhang stated, "The CCP regime depends on two means: lies and violence. Thus it pays special attention to propaganda. Especially when Jiang Zemin wanted to persecute Falun Gong, all media, including those overseas media outlets in favor of the CCP, started a full-scale propaganda campaign immediately. The CCP used propaganda to defame Falun Gong and frame it, though it has nothing to do with anything bad. The purpose was to instigate hatred towards Falun Gong."

Zhang Kaichen said he was confused by the propaganda initially, and had bad feelings towards Falun Gong, "The thing that shocked me was the fact of the CCP-staged Tiananmen self-immolation incident. I visited Tiananmen Square every year and never saw any police officers carrying fire extinguishers walking around. The victim in the incident, Wang Jindong, had an intact plastic bottle between his legs after the fire. The young girl in the incident could speak even after her throat was cut [due to a purported tracheotomy]. All these things suggest that the whole incident was the CCP's arrangement to frame Falun Gong."

"Persecution" and "Torture" do not describe the severity of the persecution

Mr. Zhang said, "Persecution and torture are weak words to describe the severe degree of the CCP's persecution [of Falun Gong]. The CCP wants to eliminate Falun Gong. It beats, abuses, and tortures Falun Gong practitioners physically to force the practitioners not only to give up their belief, but to make them succumb and collapse in spirit."

Mr. Zhang believes that the Chinese Communist Party is more evil than the Nazis. "The Nazis carried out genocide of the Jews openly. But the CCP attempts to eliminate Falun Gong in secret. After initial widespread propaganda defaming Falun Gong, it seems not to mention Falun Gong now. But the persecution is more severe than before. As Jiang Zemin said, 'Falun Gong practitioners who are beaten to death are considered as suicide.'" Mr. Zhang continued, "But the CCP completely failed. Falun Gong has spread to more than 100 countries. In China, Falun Gong informational materials that practitioners distribute are everywhere, including in the corridors and front doors of apartments. Falun Gong cannot be defeated."

Mr. Zhang said, "Falun Gong practitioners just practice it for better health. But the CCP brutally persecutes them. Whoever condones such cruelty, his morality is simply too low. How to view Falun Gong is a moral issue. The perpetrators will be brought to justice."

“Filmmaker: "If Heaven Is the Way We Saw It Tonight, Count Me In!" (Photos)”