(Clearwisdom.net) A Guangzhou City 610 Office agent, surnamed He, went to Mr. Chen Chenglin's place on the evening of September 24, 2009, accompanied by officers from Ruibao Police Station in the Zhuhai District of Guangzhou. 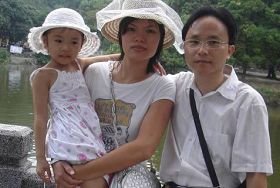 They attempted to enter Mr. Chen's house around 9:00 p.m. on September 24, claiming they needed to make a fire safety inspection. Suspecting harassment by the 610 Office, Mr. Chen immediately called neighbors and people at the Street Administration Office. Once he had confirmed there were no fire safety inspections being done in the area, he refused to open the door. Unable to get in, the agents pounded on the door for about 40 minutes. In the end, Street Administration Office head Deng promised over the phone that only he would enter the house for the inspection, and the others would remain outside. As soon as Deng entered the home, however, the 610 Office agents rushed in. They seized Mr. Chen to take him to the police station.

When Mr. Chen's relatives who lived in the same community arrived, a female agent called a dozen police officers to surround the nearby hallways and staircases. When Mr. Chen and his wife demanded to know what was going on, the agents and the police explained that they had found a Falun Gong materials production site nearby with many brochures and fliers, and Mr. Chen's telephone number, so they believed that Mr. Chen had Falun Gong materials in his home, too. Lacking sufficient evidence, the police insisted on ransacking the home, saying, "It's useless if you want to find a lawyer for this. We need no permission to ransack the house."

Failing to find anything they wanted, the agents and the police declared that, since it took a long time before Mr. Chen opened the door, he had used that time to destroy evidence. Then they took him to the Ruibao Police Station in the Haizhu District for further interrogation.

Further interrogation still did not lead to their gaining any evidence, so they had to release Mr. Chen the next morning. But they began to monitor him closely on a day to day basis.

Mr. Chen had worked on road construction for a long time. He began practicing Falun Gong in 1996. When he was working in Chaozhou City in 2000, Shantou City 610 Office agents, led by Li Dongming, took him to the Shantou Detention Center and to the Sanshui Forced Labor Camp. Because Mr. Chen taught other people how to do the exercises and explained the facts about Falun Gong during his four months at Shantou Detention Center, the guards put him in handcuffs and shackles and locked him in a small cell.

After his one-year term in the labor camp expired, Mr. Chen's workplace reemployed him due to his excellent performance and reputable character. However, 610 Office agents sent people to monitor him for a long time, first badgering him to give up the practice, then trying to entice him with material interests such as a promotion, and later intimidating him so that he would not distribute factual information.

“My Understanding of the Pursuit of Comfort ”