(Clearwisdom.net) On December 31, 2009, The Taiwan Divine Land Marching Band was invited by the Pingtung County government to participate in the 2010 New Year Celebration Parade. As the first procession in the parade, the band's 200 members were warmly welcomed. 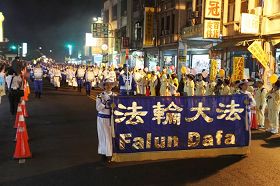 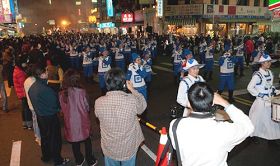 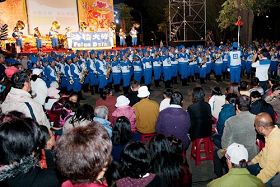 Many spectators watch the performance 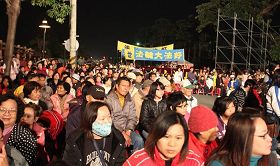 Local Falun Gong practitioners distributed flyers and joyful balloons printed with the words "Falun Dafa is great." Some spectators learned about Falun Gong, bought the book Zhuan Falun on the spot, and started reading it immediately.

The hosting organization set up a stage at the termination of the parade. The band played 12 pieces, including "Falun Dafa is Great," "Drums and Trumpets Shake the Ten Directions of the World," "Delivering Treasures," "Jubilation," and "Jingle Bells."

This is the first time that the Pingtung County Government sent a formal invitation letter to invite the band to join the parade. The government appreciated the band's participation in the parade, as it made the celebration that much more joyful.

“Malaysia: Rally Held on New Year's Day to Condemn the Persecution and Encourage People to Quit the CCP (Photos)”