Unprecedented market conditions for organ transplants between 2003 and 2006

By now, the readers may ask: Where did all the extra organs come from? Let us take a look at some unique features of the organ transplant market in China between 2003 and 2006. 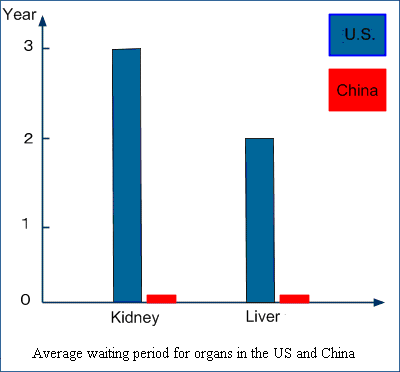 Average Waiting Period for Organs in China and the U.S.

According to a Phoenix Weekly report in 2006, as more and more overseas patients came to China for organ transplants, the fees gradually increased as well. In 2004, the fee for a liver transplant at the Oriental Organ Transplant Center was USD 32,000 (approximately 250,000 yuan). In 2005, it was over USD 40,000 (approximately 330,000 yuan). Some intermediary agencies charged a brokering fee as high as USD 13,000. In addition, overseas patients had to pay monthly fees to interpreters. Staying in the hospital also cost extra. [28] These extra fees explain the higher numbers listed in the table above. 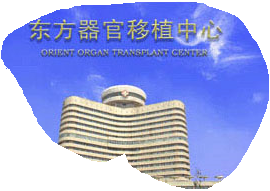 Expensive fees, along with the cheap supply of organs, made organ transplants tremendously profitable. The Organ Transplant Center of the 309th Hospital of the People's Liberation Army stated, "The Organ Transplant Center is one of the most profitable departments. Gross income was 16,070,000 yuan for 2003 and 13,570,000 yuan for January through June in 2004. It is expected that the gross income will exceed 30,000,000 yuan in 2005." [29]

Southern Weekend [Nanfang Zhoumo] reported, "The Oriental Organ Transplant Center's rapid growth has brought about huge revenue and profits. According to previous media reports, liver transplants alone bring the Center an annual income of 100 million yuan (with the exchange rate at 8.11 yuan per US dollar)." [30] In September 2006, the Center put to use a new building with a price tag of 130 million yuan. The new building has 500 beds with a more than 10,000 overall annual turnover rate. The surgery center in the new building can support the operation of nine liver transplants and eight kidney transplants simultaneously. It is the largest, vertically integrated organ transplant center in Asia."

Such profit from organ transplants bore a grave consequence. On the one hand, people with financial means are willing to buy organs at a high cost. On the other hand, the huge profit pushes the hospitals to pursue new sources of organs by all means. Given China's political and legal environment, certain groups of people become especially susceptible targets.

3. China turns into a center for global organ transplant tourism

Given the fees involved, the majority of organ transplant patients in China are made up of:

According to a Lifeweek magazine report in 2004, most of the domestic patients are those who "have their own businesses or enterprises," or those who "have positions in the government." The report also stated that within a few years, thousands of overseas patients had gone to China for organ transplants, turning China into "a center for global organ transplant tourism." "Besides Korean patients, there are patients from more than 20 countries and regions in Asia such as Japan, Malaysia, Egypt, Pakistan, India, Saudi Arabia, Oman, Hong Kong, Macau, and Taiwan who have come to the Tianjin No. 1 Central Hospital (also known as the Oriental Organ Transplant Center) for organ transplants... The ward café looks like an international conference center where patients of different colors and ethnic backgrounds gather to share their medical experiences." [31] (In July 2007, the Ministry of Public Health in China put a stop on Chinese hospitals performing organ transplant surgeries on foreign patients.)

4. A niche market within China's limited organ market takes off 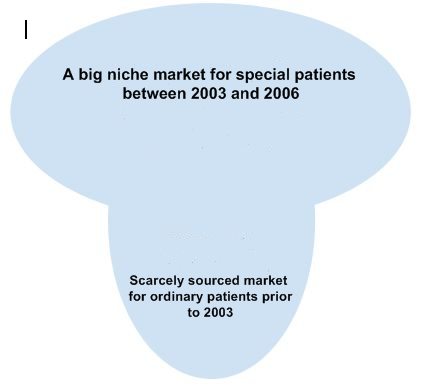 Every year, approximately 1.5 million people in China need organ transplants due to late-stage organ failures. The scarcity of organs was worse than that in the United States and other countries that have advanced organ transplant procedures. However, starting in 2003, China turned into a center for global organ transplant tourism due to its abundant source of organs. In a 2004 interview with Lifeweek magazine, Zheng Hong, deputy director of the Oriental Organ Transplant Center, proudly stated, "The availability of organs in China is in fact much better than that in other countries." [32]

So what was happening here?

In its denial of the allegations of live organ harvesting, the Chinese Communist regime claimed that there were more than 1 million patients in China waiting for organs. It used this as an argument that it was not possible to get matching organs within a short period of time. However, this denial was contradicted by claims at various organ transplant hospitals.

There were many abnormal phenomena in China's organ market during the 2003-2006 period. Besides the features discussed above, there is another one worth mentioning. The quality of the organs was not compromised as the quantity of organs increased. On the contrary, the quality of the organs supplied between 2003 and 2006 was superb. During the peak of China's global organ transplant tourism, the majority of China's organ transplant recipients were overseas patients. Similar to exported products, the organs used for these patients had much higher requirements.

Some independent overseas investigators have phoned organ transplant hospitals in mainland China, posing as patients or patient family members, to inquire about organ transplant information. The answers given were similar: "Donors are all healthy," "Donors are around 30 years old," "Quality is guaranteed to be the best." [33]

6. Sudden disappearance of the abundant donor resources after 2006

Under normal conditions, the availability of organs is rather steady, which, as we discussed earlier, is the case for Canada and the United States, where there has been no major increase or sudden decrease in the past decade. A drastic increase of organs was seen between 2003 and 2006 in China. But after the allegations of live organ harvesting of Falun Gong practitioners surfaced and attracted international attention in March 2006, there was a sudden drop in organ transplants in 2007 in China.

An article published in Nanfang Zhoumo in July 2007 describes the issue further: "Organ transplant surgeons complained about the shortage of organ donors." "Zhu Zhijun is the deputy director of the Orient Organ Transplant Center. In his office on the second floor of the Center, Zhu appeared to be worried. He told the reporter that since the Chinese New Year, the Center, which is the biggest organ transplant facility in Asia, has performed only 15 liver transplants in nearly six months, while in 2006, the Center had set a record of more than 600 liver transplants in one year." [35]

Earlier we assumed that the number of organs from death row inmates is relatively stable. Prior to 2003 and after 2006, the number was around 6,000. Several factors contributed to this stability:

1) Organ transplant technology and the use of immune depressants matured in the late 1990s. There was no sudden increase in the number of organ transplants as a result of breakthroughs in technology.

3) Lack of an organ sharing network in China, which means most of the matches take place between a local hospital and local death row inmates. This and local protectionism have limited the scope of matching.

4) Death row sentencing is in lock-step with political direction. With no recent Strike-Hard campaigns, the number of death row executions is relatively stable.

5) The legitimacy of using death row organs, as well as the moral acceptance among Chinese due to years of indoctrination that organ donation is the least contribution death row inmates could make to society, have allowed the organ transplant hospitals in China to care less about pressures from the international community.

Based on the above reasons, it can be concluded that organs from executed death row inmates are a relatively stable source of organs, and not responsible for the spike in 2003-2006, or for the subsequent sharp decline.

On January 1, 2007, the Supreme People's Court reclaimed the right to review death row sentences from the provincial supreme courts, resulting in the reduction of death row sentences. Was this the cause for the severe shortage of organ donors in 2007? It had an impact but was not the root cause. According to a Xinhua News Agency report on March 10, 2008, after the Supreme People's Court's reclamation of reviewing death sentences, 15% of death row sentences were overturned in 2007. [36] This percentage (likely to be overestimated) indicates that the recovery did not have a large impact on organs available from the executed death row inmates. This can be supported by the actual number of organ transplants performed. In the section, "Reference to Historic data" in Chapter I, we quoted China Daily that 65% of organs came from death row inmates in 2008 and 2009, in which close to 10,000 cases of organ transplants were performed each year. That means that approximately 6,000 organs came from death row inmates, which is close to the level between 2000 and 2002.

Therefore, the sudden decrease in organs in 2007 has to be due to the sudden disappearance of other organ resources (although it is still uncertain whether they have completely disappeared).

In conclusion, the rapid growth between 2003 and 2006 and the ensuing quick disappearance of organ resources in China are unprecedented in history and bear unique features that are not supported by the theory that death row inmates were the main source of organs during the years in question.

Since 2007, due to the shortage of organ donors, live related donors have become a new source of organs. Chinese media have also carried out extensive campaigns on this subject in an effort to raise awareness. According to a People's Net report, the Oriental Organ Transplant Center in Tianjin performed 84 cases of live donor liver transplants in 2007 (with a relative donating a partial liver). [37] However, since live donors did not become a major organ resource until after 2006, this does not help explain the period between 2003 and 2006, when China's organ market skyrocketed.

“Dancers Profoundly Impressed as Shen Yun Debuts in Ft. Lauderdale: "This is what the world needs the most!" (Photos)”