(Clearwisdom.net) Shen Yun Performing Arts was forced to cancel its seven shows in Hong Kong. The Hong Kong Immigration Department denied visas of at least six core production staff several days before the scheduled performances. Law Yuk-Kai, director of the Hong Kong Human Rights Monitor, said that such a thing has never happened before, setting a precedent that could damage the freedom of cultural art in the future.

The sponsors of the Shen Yun shows in Hong Kong held a rally at Charter Garden on January 26, 2010. They later marched to the Government Secretariat to protest the decision to deny Shen Yun visa applications. They called upon the people of Hong Kong to urge the government to correct its mistake. 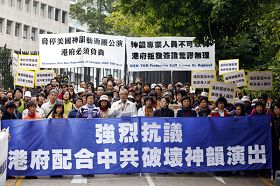 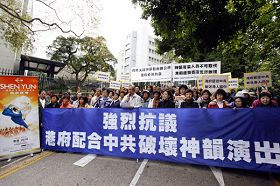 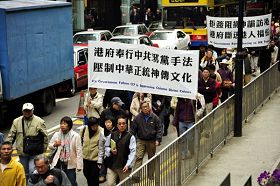 Shen Yun sponsors said in a statement that they, "regret that some of the authorities collude with the Chinese Communist Party (CCP) for personal profits."

The protesters presented a letter of protest to Tsang Yam-Kuen, chief executive of the Special Administrative Region.

Former Member of Legislative Council: Everyone Should Stand Up For His Rights

Pastor Fung Chi-Wood, former member of the legislative council, felt worried because people's "Freedom and human rights are being suppressed groundlessly." Mr. Fung hopes that the government will quickly fix the mistake and let Shen Yun perform in Hong Kong. 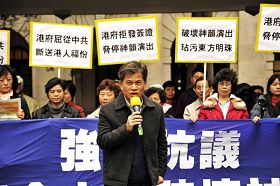 Lam Wing-Yin, the Democratic Party's former Sai Kung District council member, criticized the Immigration Department's reason for denying the visas, "Claiming that issuing the visas would take away work opportunities for local people sounds ridiculous. The whole thing makes the government and the immigration department look bad. The government is becoming the CCP." 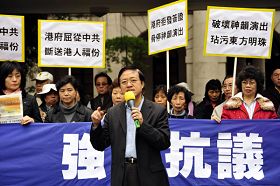 "This is not an isolated incident. The government simply does not welcome people from outside, which is irrational."

Howard Lam Tsz Kin, member of the Central Commission of the Democracy Party, believes the incident showed that politics is violating the system of rule-by-law. "The citizens will see more clearly the CCP is fooling them." 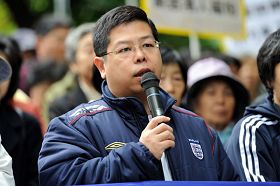 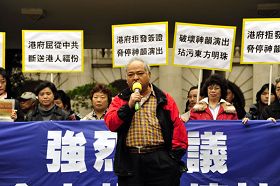 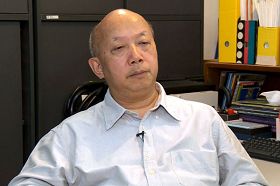 Law Yuk-kai, director of the Hong Kong Human Rights Monitor, said that the immigration department denied the Shen Yun production staff visa applications just a few days before the scheduled performances. "The reason of protecting the job market in Hong Kong is far-fetched. Demanding that Shen Yun replace a technical group in a foreign country for a short period of performances is inappropriate."

Law believes that there is a political motive for the decision. "Hong Kong should have its own administrative permission right under 'one country, two systems.' We must cherish the right because that makes Hong Kong different (from China)."

"If the Hong Kong government believed that there was an important reason to deny the visa applications, it should have done so earlier so that Shen Yun could re-apply or go through a legal process. Denying the application just a few days before the shows is indeed immoderate."

Law believes the discriminative act of the government would push away performing groups that have in their shows different opinions from that of the government. "The variety of cultural events will go down. It's a great loss of the people in Hong Kong."