(Clearwisdom.net) On January 18, 2010, to memorialize civil rights leader Dr. Martin Luther King, Jr., the MLK Parade Foundation of Houston organized a grand parade in downtown Houston. About 25,000 people participated in the parade. Falun Dafa practitioners, who were taking part for the fourth year, were the only Chinese group in the parade. 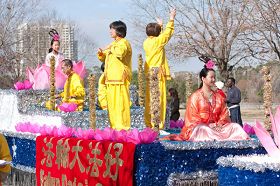 Falun Gong practitioners demonstrated the exercises on a decorated float.

On the morning of January 18, the weather changed from cold rain to sunshine, and excitement was in the air. The parade started at 10 a.m.. Over 150 groups and organizations marched along the two-and-a-half-mile parade route to Allen Parkway. The route took about 2 hours to complete.

The Falun Gong group was part of the second section of the parade. It was composed of a decorated float and drummers. On two sides of the float were banners printed with "Falun Dafa" and "Truthfulness-Compassion-Forbearance." On the float, there were two practitioners dressed as celestial maidens and four practitioners demonstrating the exercises. The drummers were all in yellow outfits with big Tang drums and small waist drums. The Falun Gong contingent stood out in the parade with its unique, refreshing, and colorful style.