(Clearwisdom.net) From December 10, 2009, International Human Rights Day, until December 13, 2009, the Truth-Compassion-Forbearance Art Exhibition was held in the art gallery of the Hotel Silva in Busteni, a well known resort in Prahova Valley in the Carpati Mountains.

Silva Art Gallery is a well known modern art gallery in the area, and its manager, who is also the Silva Hotel manager, is a local patron of the arts, often promoting artists and cultural events at this location. The opening was on Thursday, December 10, at 7:30 p.m.

Before the opening, practitioners traveled to other resorts that surround Busteni (like Sinaia, Azuga, and Poiana Tapului) to hand out flyers in the hotels and cultural institutions, and also to give invitations to officials, so that many came to the exhibition. 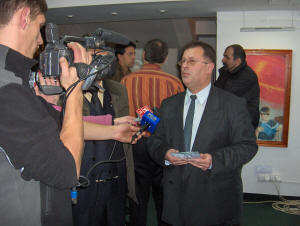 Media interview a practitioner at the Truth-Compassion-Forbearance Art Exhibition in Busteni, Romania

The day before it opened, the event was announced in the local newspaper and on the TV local station. That evening four well known Romanian TV channels showed up, and journalists took footage of the opening and did interviews, which were presented daily, even after the closing of the exhibition, on Prima TV, Montana TV, ProTV, and AlfaTV. Articles also appeared in the newspapers Romanian Epoch Times, Prahova Valley, and TopBusiness.

Mr. Alexandru Gica, the manager of the art gallery, opened the exhibition with a speech. He was very impressed by the paintings and by their message of hope and said that the event would certainly be remembered by everyone present. 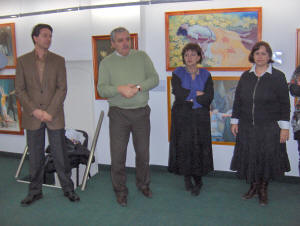 Persons of note speak at the opening ceremonies of "Truth-Compassion-Forbearance" Art Exhibition in Busteni, Romania

Three other persons of note spoke at the opening ceremonies: Mr. Mihai Precup, the curator of the Silva Art Gallery; Mrs. Dragu Mariana, an art historian who works at the Romanian National Museum of Art; and Mrs. Lucia Humeniuc, co-president of SIRDO, a Romanian human rights organization.

All the speakers commented on the fact that each painting represented a true story, making the creators also the heroes of their works of art. "The persecution of Falun Gong is being monitored by all human rights organizations," said Mrs. Humeniuc. She expressed her hope that this ordeal would not continue much longer.

The president and vice-president of the Romanian Falun Dafa Association also spoke before the audience to explain about Falun Gong and the CCP persecution. 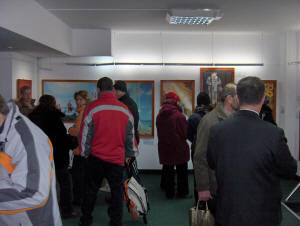 Many visitors come to the "Truth-Compassion-Forbearance" Art Exhibition in Busteni, Romania

The visitors, many moved to tears by the paintings, signed the petition to stop the persecution of Falun Gong in China. They wanted to know more details about Falun Dafa and about the story behind each painting. They looked at the movies featuring the artists and their comments. In the following days they came by the hundreds. They bought posters, postcards, and CDs with music composed by practitioners. 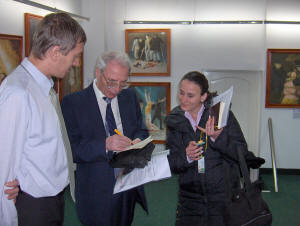 Positive feedback from the visitors 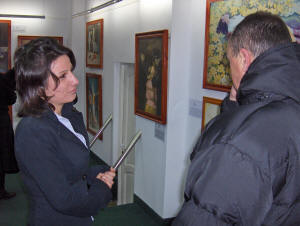 As they left, almost everyone thanked the organizers for the opportunity to see the exhibition and asked to be informed about future events of this kind.

The practitioners cooperated very well as one body, almost everyone making a contribution to the organization and presentation of this exhibition. Even a very new practitioner, who started to practice very diligently after seeing the exhibition in Bucharest, gave explanations in the guided tours. This was a very important test of cooperation for the cultivation environment in Romania, which the majority of cultivators passed well. Besides the great coverage of the event in the media (TV, websites, newspapers - local and national), many truth clarification materials were distributed.

The next exhibition will be held in February 2010 at two locations in Suceava, the capital of Suceava County, and Moldavia, the famous northeast region of Romania.