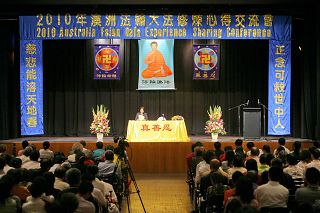 One practitioner, who is a local contact person, said, "I was shocked when I read Master's new article "Fa Teaching at the 2009 Greater New York International Fa Conference," in which Master said,

"That is why it's said that always cultivating as if you were just starting will surely result in achieving your ultimate rank."

When I first started practicing, I woke up early to do the exercises every morning, no matter if it was cold or hot. I felt energetic all day, even though I got little sleep. We read the Fa all day during weekends and holidays. I felt cleansed every time after reading the Fa and sharing experiences with fellow practitioners. The intensive Fa study and exercises in those days created a solid foundation for my cultivation. But since becoming a contact person, I have done the exercises less frequently, and I often feel tired."

She said, "Studying the Fa well is critical for doing the Fa-rectification well. When I calmly read the Fa, I feel that my body is surrounded by energy, and my projects go smoothly. I realized that no matter how busy we are, we should not forget what the foundation of cultivation is."

A contact person from Brisbane told how practitioners in Brisbane collaborated with each other, eliminated selfishness, and consequently got the best theater for Shen Yun. She shared how she looked inward, and stopped complaining about fellow practitioners. "When looking inward, I realized that all the conflicts are actually chances for me to see my attachments and improve. In Fa-rectification cultivation, we still need to pay attention to personal cultivation, otherwise we can't do the three things well," she said. "When we cultivate ourselves well, we have fewer conflicts and the energy field around us is stronger."

The lawsuit project team shared their experiences, taking the lawsuit as a process of cultivation. They said the purpose of the lawsuit is to save sentient beings, so we should not rely on the everyday lawyers.

Several practitioners shared their experiences of clarifying the truth to congressmen and cultivating in daily life. The conference concluded at 5:00 p.m.