(Clearwisdom.net) On the evening of September 2, 2009, the annual Jilong Festival Parade was held. The Taiwan Falun Dafa Association was invited to participate for the third time. The Taiwan Divine Land Marching Band and waist drum team joined the parade and won warm applause. 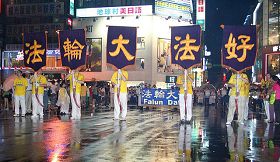 The Taiwan Falun Dafa Association was invited to participate in Jilong festival parade for the first time in 2007 and was awarded the top award. In 2008, it won the excellence award.

At this year's event, the MC introduced the band, saying, "The Divine Land Marching Band is composed of 200 Falun Gong practitioners. They come from all walks of life. They travel to different countries to perform. Today they bring us the grace of Falun Dafa and Truth-Compassion-Forbearance."

A dozen celestial maidens in the Falun Gong procession distributed origami lotus flowers with bookmarks that read "Falun Dafa is great." They also gave the flowers to spectators on the rostrum and police on duty after the parade.