(Clearwisdom.net) On the evening of August 13, 2009, 1,800 Falun Gong practitioners from Taipei City and nearby areas, including Taoyuan, Hsinchu, and Miaoli, gathered at the Jiantan Youth Activities Center in Taipei City for a three-day Fa study and experience sharing conference.

According to the practitioner in charge of the conference, this was the best attended conference to date. A lot of practitioners who had been cultivating for less than a year also attended. 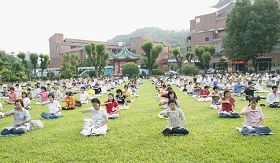 "We have been thrilled with the Fa study," said new practitioner Xu Yongtian of Luzhou City. Xu has read Zhuan Falun about 70-80 times after obtaining the Fa eleven months ago; he has also read, at least once, 38 other Dafa publications.

Shortly after Xu Yongtian started practicing Falun Gong he went to Sanchong City to watch the 9-day Falun Gong lecture series. He related, "After the first lecture was over, I hurried to the bookstore, where I bought the book Zhuan Falun. I finished reading the book before attending the lecture the next day. I felt both amazed and moved. I used to smoke nearly two packs of cigarettes a day, but before the third day was over, my addiction was gone. From then on, I didn't feel like smoking--it seemed like I had never smoked before."

Xu Yongtian continued, "Dafa made me understand that if I depend on myself, and not others, my cultivation is more solid. While studying the Fa, I am happy, feel solidified, and am developing faith and willpower. Already, I firmly feel that I wouldn't want to give up this Dafa, and I feel fortunate to be a practitioner."

Lin Mingtang, an assistant bank manager who lived near Zhongzheng Memorial Square (Freedom Square), had seen Falun Gong activities in the square many times. The group exercises looked so dignified and distinguished that he was really moved by them. Therefore, he became a Dafa practitioner in October 2007.

Lin Mingtang used a story from "Journey To The West" to express his comprehension of a Dafa principle: Sun Wukong (the Monkey King) said to Tang Sanzang, "I've helped you so much throughout this journey, when will you remove the 'inhibitor' from my head?" Tang Sanzang replied, "The inhibitor has already disappeared from your head because the things you have said and done agree with the standards of this level. If your mind still bothers you, it's because you think that the headband is still there, —but it isn't."

Lin Mingtang understood that an attachment comes from one's mind; its elimination depends on one's determination and also on one's surroundings. He said, "We Dafa practitioners are also responsible for our good or bad behavior. Therefore, study the Fa well, identify and eliminate your attachments, and cultivate well--all these are the basics for clarifying the truth and validating Dafa."

Hong Yaowen, a Taipei practitioner since the end of 2001, told me an interesting story. On August 15, when three fellow practitioners and he shared a taxi ride home, the driver, named Yang, asked, "Are you guys here to take part in some kind of activity?" Upon hearing our response, Yang became excited, "I've been meeting lots of Falun Gong practitioners. You guys are all good people, I'm lucky again tonight!"

Yang then told the practitioners, "A little while back, I accompanied a businessman friend of mine to the mainland. When I saw some billboards smearing Falun Gong, I became frustrated and said that Falun Gong practitioners are all good people. There are plenty of them in Taiwan; why are they not allowed to practice in China, and why are they killed so their organs can be sold--where is your conscience?!"

In order to avoid feeling embarrassed, some of the listeners responded by repeating the Chinese Communist Party (CCP) lies. Yang told them, "You have been deceived by the CCP's blocking the news, and by their lies about Falun Gong. If you use a computer you can easily learn the truth. Everywhere in the world, except China, people say that Falun Gong is good. You've been terribly deceived and you still repeat the CCP lies. Why can't you see how foolish you've been?"

“Validating the Fa with the Changes in Me”