(Clearwisdom.net) (Correspondent from Jilin) Between 5 a.m. and 6 a.m. on August 12, 2009, while traveling to her hometown, Ms. Wang Xuchun was followed by officers from the Yuming Township Police Station. The police followed her to the home of her bother where officers Niu Chunping, Meng Dongzi, and Dong (first name unknown) arrested her. She was taken to the Yushu Domestic Security Division for interrogation and then detained at a detention center.

According to people who have been released from the detention center: "Guards force-fed Wang Xuchun until she was bleeding from the mouth and nose." Her clothes were also torn. Although she lost consciousness, the police did not release her. 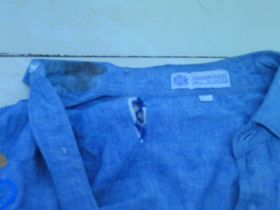 Bloodstains on the right collar are clearly visible. The back of the garment was torn, leaving a four-inch-long opening. The three buttons above were pulled off

Ms. Wang's younger sister, Ms. Wang Xufang, was arrested by officers from the Yuming Police Station on February 24, 2008. She was sentenced to a four-year prison term, and is now in Heizhuizi Prison. Ms. Wang Xuchun had been taking care of her sister's two young children before she was arrested. The two children have lost the care of their mother and also their aunt.