(Clearwisdom.net) On September 26, Sweden's Quitting the Chinese Communist Party (CCP) Service Center organized a rally at Mynttorget Square to condemn the Communist regime's atrocities and support over 60 million Chinese people who have withdrawn from the CCP and its affiliated organizations.

The center displayed banners and posters enumerating the CCP's atrocities committed over the past 60 years. The persecution of Falun Gong was highlighted. The display drew the attention of many people. After learning the facts, especially about the regime's harvesting of organs from living Falun Gong practitioners, people expressed their indignation and signed a petition to condemn the CCP's persecution of Falun Gong. 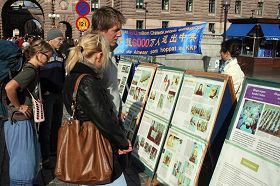 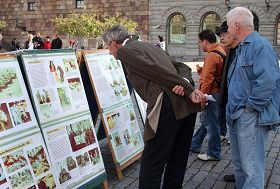 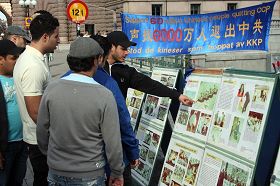 People learned about the CCP's atrocities at the rally site 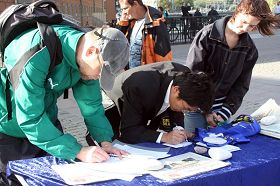 Petra Lindberg, chairperson for the Support Human Rights in China (SHRIC), said that the Quitting the CCP movement suggests that the Chinese people are now awakening to the truth about the CCP. She said, "Over 60 million people have denounced the CCP! This is very admirable and should be celebrated."

Anna, a college student, carefully read all the posters. She was shocked by the CCP's atrocities and signed the petition to support the Chinese people quitting the party. She said, "I think it is very important to support people who want to quit the party."

A young Chinese girl came to the rally site with her boyfriend. After studying the posters, she talked with a center volunteer and then quit the Communist Youth League.

“To the Midwestern US Fa Conference”