Ms. Tang Shirong from Chongqing Has Been Missing for Four Years (Photo)

One evening in early September 2005, Ms. Tang Shirong, who was then 65, left home to go out and put up posters which listed the mistreatment of practitioners in Jingkou Town and the people responsible, including Zhuo Jin, secretary of the Jingkou Town Political and Judiciary Committee. The following day, the posters were seen everywhere across Jingkou Town. But, Ms. Tang never returned home. Ms. Tang's family reported her missing to the Jingkou Town Police Station and the nearby Tongjiaxi Town Police Station, Beibei District. Officers at both police stations denied arresting Ms. Tang and stated that they had no obligation to search for the missing practitioner. 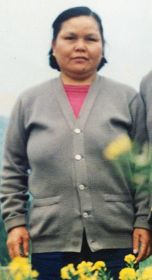 The persecution against Ms. Tang began in 1999. Initially she was detained for fifteen days for appealing in Beijing for the right to practice Falun Dafa. Since then, people from the Jingkou Town government, police station, local residential committee, and her retiree committee repeatedly harassed her at home, tried to force her to sign the "Guarantee Statement", and threatened to send her to a brainwashing facility or forced labor camp. She was forced to flee home to avoid the ongoing harassment.

In February 2001, Ms. Tang was arrested for distributing fliers about Falun Dafa in the Wuxing Community in Tongjiaxi Town, Beibei District. She was first detained for six months in the Beibei Detention Center where she was forced to fold cardboard boxes every day. Ms. Tang was served rotten food and placed in an unsanitary cell where she contracted scabies from her cell mates.

In the labor camp, the guards ordered drug addicted inmates to strip search Ms. Tang, and then chop her hair in an uneven bowl-cut to humiliate her. The guards forced her and other practitioners to undergo intensive military training under the hot sun. If a practitioner did not meet the guards' requirements, that practitioner would undergo extra training. If a practitioner did not obey the guards' orders, the guard would have a drug addict inmate beat her. To protest against her illegal arrest, Ms. Tang refused to recite the prison rules. The guards ordered drug inmates to bind her arms and forced her to stand bent over at a 90-degree angle with her legs close together. The guards had the drug inmates strike her back with their elbows any time she moved. In addition, they deprived her of sleep for two weeks. In October 2001, Ms. Tang's blood pressure reached 240 as a result of the mistreatment. She was allowed to seek medical treatment outside the prison.

After Ms. Tang came home, Jingkou Town government agents and local police officers went to her home to take her to a brainwashing facility. She managed to escape.

Since 2002, during holidays and at other random times, workers from the residential committee and officers from the local police station went to Ms. Tang's home to harass her and threaten her to not practice Falun Gong. Once Ms. Tang went missing, all "visits" stopped.