Chicago: Chinatown Parade Calls for an End to the Persecution (Photos)

(Clearwisdom.net) On September 26, Falun Gong practitioners from the Midwestern US held a grand parade in Chicago's Chinatown to showcase the beauty of Falun Dafa, call for action to stop the persecution, and urge people to quit the Chinese Communist Party. People on the sidewalks and from the shops along Wentworth Avenue watched the parade. 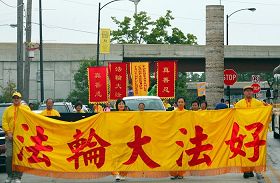 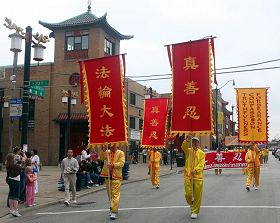 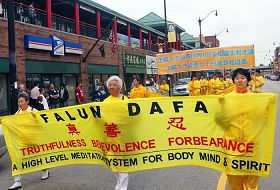 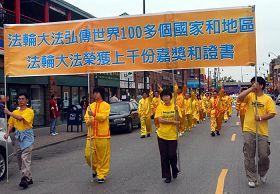 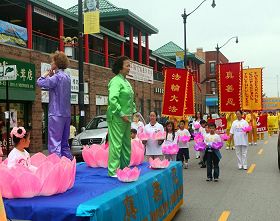 Showcasing the beauty of Falun Dafa

The parade procession consisted of three parts: "Falun Dafa Is Good," "Stop the Persecution," and "Quit the CCP." 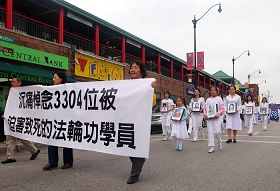 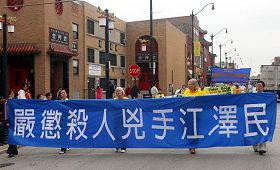 The second group, "Stop the Persecution," was led by a large black and white banner which read "Commemorating the 3,304 Fellow Practitioners Who Have Been Persecuted to Death." The banner was followed over 30 women (all practitioners) dressed in white and holding portraits of practitioners who died in the persecution. Other banners in this section called for an end to the persecution and told of Falun Gong practitioners' noble resistance over the past ten years.

The third group, "Quit the CCP," displayed banners and posters which revealed that over 60 million Chinese people have withdrawn from the Chinese Communist Party and its affiliated organizations, and urged local Chinese immigrants to quit the CCP to welcome a new China without it.

A Chinatown worker watched the parade while on his break and said that Falun Gong is a good Qigong practice. When he saw a banner which read "Bring Jiang Zemin to Justice," he said: "I don't like him, either. He did nothing but suppress people."

Mr. Zhang, who came to the US to study, said that such a parade cannot be seen in China. "It was quite impressive to see police vehicles leading the parade... I read all the banners," said Zhang.

A Chinese woman took a flier at the beginning of the parade. She read aloud the "Truthfulness-Compassion-Forbearance" Chinese characters printed on the flier. A practitioner asked her if she liked these three words. She replied with emotion, "Yes," and tears streamed down her cheek. She said, "In my hometown, there were many people who practiced Falun Gong. When the persecution started, however, they stopped because of fear. I am so happy to see so many Falun Gong practitioners here today."

As practitioners have been persistently raising awareness and helping people to quit the CCP in Chinatown, more and more people have learned the truth behind the persecution and are quite receptive. Pointing at the banners, some parents read the characters for their children and they were very happy to take informational materials. Many Chinese people took photos and waved to show their support.

Dr. Xu and his five family members drove five hours from Michigan to participate in the parade. He said, "I was in the first part of the parade, and I noticed that our parade attracted many people. Our presence and demeanor give people an opportunity to see what Falun Gong really is. Our mission is very simple, that is 'End the Persecution.' Persecution against any groups for their belief is not right, not to mention that the brutal persecution of Falun Gong has lasted over 10 years. For us, we will continue to peacefully appeal to stop the persecution till the persecution is ended."

“My Gratitude to Teacher Li for Giving Me a Second Life”