(Clearwisdom.net) On September 25, 2009, Falun Gong practitioners held a series of activities near the G-20 Summit. They held group practice in the morning and a peaceful march in the afternoon. They explained the facts about Falun Gong to people and exposed the Chinese Communist Party (CCP)'s brutal persecution. 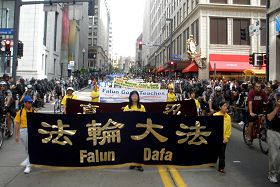 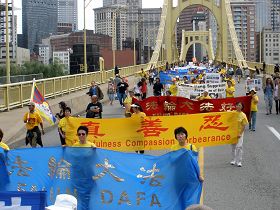 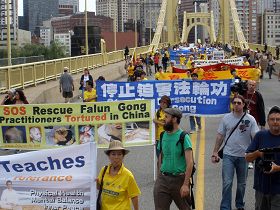 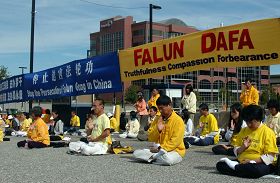 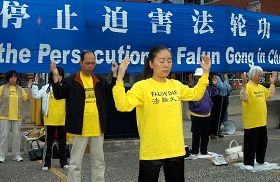 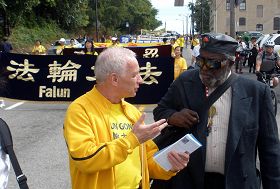 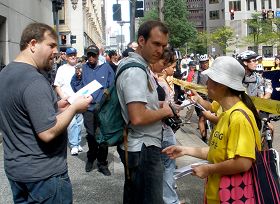 Explaining the facts to passers-by 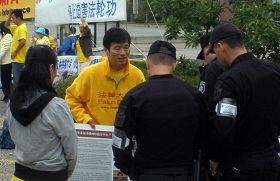 Police Officer John and many of his colleagues were touched by the peaceful activities, and many of them came over to view the posters. After seeing the picture of practitioner Gao Rongrong, who was horribly disfigured by labor camp guards' electric shocking, John was appalled, "This is a disgrace for humanity. How could such a thing be allowed to happen?"

The peaceful activity of Falun Gong practitioners was a stark contrast to other groups' noisy protests. Some of the police officers on duty told practitioners, "We are here to protect you. We need peaceful groups like you."

Local resident John came over to ask Falun Gong practitioners after the march ended, "Falun Gong is so peaceful, why does the CCP attack it?" After finding out about the CCP's track record in persecuting Chinese people and damaging Chinese culture, John said, "I understand now. I am sorry that the United States has not taken more action against the persecution."

Ms. Fuji, a spectator, said, "I had heard of the persecution of Falun Gong before, but it is only today that I understand Falun Gong better. I saw that you are very peaceful, so my husband and I walked with you from the beginning to the end of the march."