Denmark: Practitioners Display the Goodness of Dafa at the Aarhus Culture Festival (Photo)

(Clearwisdom.net) The Aarhus Culture Festival in Denmark is held from August 28 to September 6. The theme this year is "Hope is Ahead". On August 29, local Falun Gong practitioners set up a booth at the festival and introduced Falun Dafa to the people. 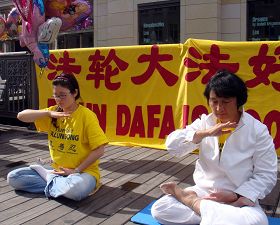 Practitioners hung banners and demonstrated the exercises. A lady watched them for a long time and said: "They must be tranquil in their hearts, as they are not influenced by the noisy environment."

Several people said they had heard about Falun Gong and wanted to learn the exercises. Many tourists accepted the truth-clarifying materials.

The Aarhus Culture Festival started in 1945 and has been held every fall since then. The Queen of Denmark has been the honorary chair and the Mayor of Aarhus has been the chair of the festival every year.

“Do Not Be Attached to Eloquence”