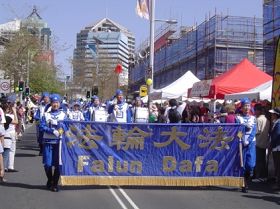 The Sydney Divine Land Marching Band made its first appearance in Chinese ancient costumes in the Chatswood Spring Parade. The band led with a large banner reading "Falun Dafa," marching forward while performing vigorous music. When they entered the main street, the host of the activity introduced to the audience, "This is the Falun Dafa contingent, Falun Dafa is a spiritual movement, they conduct themselves based on Truthfulness-Compassion-Forbearance. Falun Dafa cultivation brings people physical and mental well being."

The parade procession was composed of different groups, featuring a diverse range of cultural backgrounds. The Divine Land Marching Band impressed spectators on both sides of the street with its huge lineup, resonant music and magnificent momentum, and earned praise from the audience.

Shortly after practitioners set up a truth clarification booth, at the fair, a western lady walked up to inquire about the practice site. She said that she had bought a copy of the book Zhuan Falun at last yer's Spring Fair, and now she hoped to learn the five sets of the Falun Gong exercises. She was very pleased after obtaining the information she needed. She then asked some questions about doing the exercises, and the practitioners answered her questions. Before leaving, she agreed to meet practitioners at the practice site the next day.

A western lady living in Parramatta said, while learning how to fold paper lotus flowers, that she had seen Falun Gong practitioners doing the exercises in a big group at City Hall of Parramatta, and both her mother and she wanted to learn. Her mother said that the exercises looked peaceful, and that the practice must be good. Last year, her mother and she had planned to travel to China for sight-seeing, but after learning about the CCP's persecution of Falun Gong, they changed their plans and instead traveled to Thailand.

Citizens Hope to Stop the Persecution

A man who came to sign the petition on his own initiative before the close of the fair said that he "should do something that can truly help put an end to the persecution." A practitioner told him, "If more people who have learned the truth stand up to speak, prompting the Australian government to condemn the CCP's crimes, it will help put an end to the persecution."

An older couple from Hong Kong watched the parade and came up to the Falun Gong booth. They said that the Chinese government is wrong to persecute Falun Gong. They had learned a lot about Falun Gong in Hong Kong. They said, "We support you, Falun Gong is extraordinary."

The day passed quickly. Practitioners participating in the event felt that they had a fruitful day. As members of the community, they believe that it is their responsibility to let more and more people in the community know about the persecution of Falun Gong, and help more and more predestined people understand the magnificence of Falun Dafa.

“Delivering the True Facts About Falun Gong to a Mountain Community”