(Clearwisdom.net) On September 9, Falun Gong practitioners attended Orientation Day at the National Yilan Commercial Vocational High School. They performed a play to introduce Falun Gong to the new students and to expose the brutal persecution taking place in China. 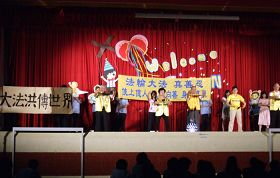 The play briefly demonstrated the basic teachings of Falun Gong - Truthfulness-Compassion-Forbearance, shared how the practice has spread throughout the world and exposed the persecution of Falun Gong by the Chinese Communist Party (CCP). The torture and the CCP's organ harvesting from living practitioners were exposed through the play.

The practitioners explained to the young people that students and teachers in Taiwan have freedom to practice Falun Gong, but people in Mainland China are being persecuted for practicing Falun Gong. Some Chinese students have been deceived by the slanderous government propaganda and developed hatred toward Falun Gong. The practitioners expressed that they would do their best to change the situation.