"Kingston Carnival" is an annual event held by the British Commission for Racial Equality. On a day in September every year, local people of different races, backgrounds and cultures come here together to celebrate. After the all day event, many people at Kingston learned about Falun Gong. Many of them signed the petition protesting the CCP's persecution, and after hearing an introduction by practitioners some immediately said, "We need this (Falun Gong)!" 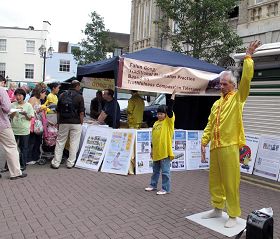 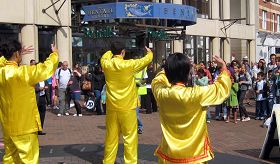 Practitioners who participated in the event set up a Falun Gong Information booth in a corner of the market area. The location was at a traffic crossing where a flow of people passed by. The practitioners placed many banners and display panels with words such as "Falun Dafa Is Great," "Falun Dafa Teaches People Truthfulness-Compassion-Forbearance," "Falun Gong Is Brutally Persecuted by the Evil CCP in China," "Stop the Persecution of Falun Gong," "The Atrocity of Organ Harvesting from Living Falun Gong Practitioners Must Be Stopped," etc. Beside the information booth, some practitioners demonstrated the Falun Gong exercises, some distributed leaflets to passers-by, some explained the facts to passers-by and, at the same time, collected signatures to protest the persecution. 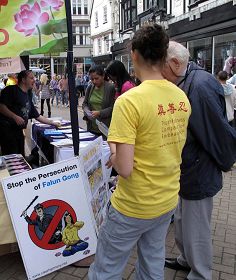 Practitioner explains the facts about Falun Gong at the information booth 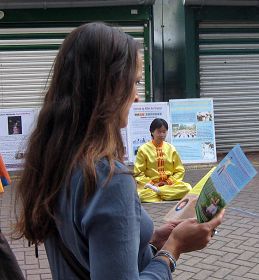 The organizer of the event arranged for Falun Gong practitioners to demonstrate the exercises twice on the square in the town centre. The demonstration attracted many people to pause and watch. Kingston is a university city which is about 25 minutes away from London by train and there are many Chinese students.

The people in Kingston were interested in Falun Gong exercises. When accepting leaflets, many said that this was the first time they'd heard about Falun Gong. A few hours later, over 60 people left their phone numbers hoping to participate in free Falun Gong teaching sessions to be held nearby. Among them, a few people expressed that Falun Gong was what they had been looking for and hoped that they could learn it immediately. A practitioner narrated her own experience to an Indian lady about Falun Dafa. After hearing her story, the lady said: "We need this kind practice; the more the better." A person told the practitioner that he had already read the book Falun Gong. On seeing the book Zhuan Falun on the information desk, he immediately bought a copy.

Falun Gong practitioners noticed that some people stood near the Information Desk for a long time and some who left then came back again to read more information. A middle-aged British gentleman left after signing the petition and came back again after a while. At this time, a Falun Gong practitioner gave him a DVD of the Nine Commentaries on the Communist Party, telling him that he would understand why the CCP persecutes Falun Gong after he viewed the contents of the DVD. The practitioner also gave him a newspaper containing Falun Gong information. 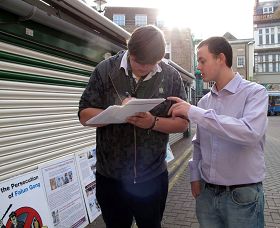 Jake signs the petition to condemn the CCP's persecution of Falun Gong.

Jake is a student at the University of Kingston. This tall young man looked at the display boards for a long time and then went to watch the demonstration of Falun Gong exercises. He was still there even when the activity was coming to an end. Robert, a practitioner, went up and talked to him. Having learned more, Jake told Robert that everyone should work together to stop the CCP's persecution of Falun Gong. After that, Jake signed the petition.