(Clearwisdom.net) In March 2005, 58-year old Falun Gong practitioner Ms. Wang Shufen was subjected to three years of forced labor, and she was then sent to Masanjia Labor Camp. For practicing Falun Gong, she was brutally tortured including forced sitting on a small stool, death bed, the "big hang-up" and others.

After entering the labor camp, Ms. Wang Shufen was detained in Team 1 of Division 3. In order to force her to give up practicing Falun Gong, guards often kept her alone in a storage room or bathroom. She was forced to sit on a small stool for nearly 20 hours without a break. Many evildoers surrounded her to brainwash her. After more than two months of persecution, they did not succeed and transferred Ms. Wang Shufen to Team 1 of Division 2.

In 2005, when July 20 was approaching, all of the practitioners detained at Division 2 refused to wear labor camp uniforms. Guards forced them to sit on small stools and did not allow them to eat or use the toilet. Guards also picked some practitioners and detained them separately, isolated from the outside. They then beat practitioners brutally. Because of the severe beating, several practitioners could not get out of bed for days and could not take care of themselves.

Ms. Wang Shufen was listed as one of the "key persons." Guards dragged her to the office. Several evildoers began to beat her including Zhang Xiurong (division head), Zhao Jinghua (team head), Shi Yu (team head) and others. They grabbed Ms. Wang Shufen by her hair, pushed her to the floor, beat and kicked her. As a result, her head was swollen and her face turned purple. She had bruises all over her body and could not stand.

4. Beating and hanging up

In April 2006, Ma Jishan (education section head) and Liu Yong (security section head) came to Division 2 with more than 20 male guards to persecute practitioners who refused to do the hard labor. Guards Zhang Jun and Wang Qi beat Ms. Wang Shufen brutally. They dragged her up and down, and forced her to kneel down in front of them. Ms. Wang Shufen refused and Zhang Jun became angry. He beat her severely until she lost consciousness.

On that afternoon, Ma Jishan tortured Ms. Wang for a long time. He hung her up from the bunk bed and tortured her for three consecutive days. In the end, she was beaten so badly that she could not stand. She had injuries all over her body and had difficulty eating. 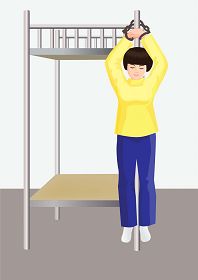 In September 2009, Ma Jishan and other guards applied the torturing method "big hang up" to practitioners. Guards hung practitioners by cuffing their hands on two bunk beds, one hand on the upper bunk and one hand on the lower bunk. They then tied up the practitioners' legs. The guards then dragged the beds outwards so that both arms were stretched to the maximum. The handcuffs stuck at the wrist and it was painful to the bone. Not only that, for a very long time, practitioners were deprived of food, sleep and use of the toilet.

The torture of the "big hang-up"

During the three years when Ms. Wang Shufen was detained at the Masanjia Labor Camp, she had to do intensive labor for more than 18 hours a day. If she could not finish the assignment, she received physical punishment, extension of her term, deprivation of food, water, and so on.

Ms. Wang Shufen lives in Honghe District at Qingyuan Town in Qingyuan County of Fushun City, Liaoning Province. Before the three years of detention at Masanjia Labor Camp, she was illegally arrested and beaten by Li Hongbin and others from the Qingyuan County Police Department. In the evening on March 18, 2005, Ms. Wang Shufen and her husband rode a motorcycle to the countryside. Li Hongbin and other police arrested and took them to the Qingyuan Police Department. Xu Jinrong (policewoman) and a male police officer beat her, kicked her and slapped her in the face. As a result, her face and head were swollen with blood dripping, and both her legs turned purple. In the end, she was sent to Masanjia Labor Camp for persecution.

“I Am a Young Falun Dafa Disciple”