(Clearwisdom.net) The "Hometown Ceremony" of Toda City, Saitama County, Japan is a large-scale festival which attracts nearly 100,000 visitors every year. On August 30, 2009, students and teachers from the Minghui School participated in the 35th Hometown Ceremony to promote Falun Dafa to local residents. 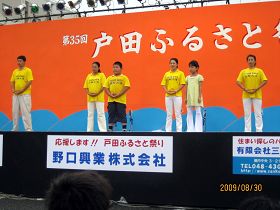 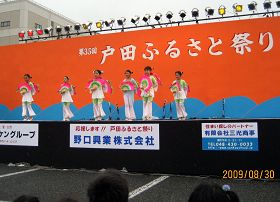 The students and teachers from Minghui School performed traditional Chinese dances, and demonstrated Falun Gong exercises on the stage. All the seats were occupied, and many people had to stand to watch. Before the performance started, it began raining. Mothers took out umbrellas for their children and the families continued watching the performance with smiles.

When the little practitioners took the stage, the audience was impressed by their pureness, and comments such as "very lovely" could be heard. When the students demonstrated the exercises, the audience listened to the introductions and many followed along with the movements, especially the young children, who learned the movements seriously. Some people who were standing under the shelter ran to the stage to take photos when the students performed.

After the performances, many people asked the teachers and students where they could learn the exercises.

“Elevating Through Memorizing and Reciting the Fa”