(Clearwisdom.net) At the beginning of August, 2009, Falun Gong practitioners in Finland held activities in a riverside park near downtown Helsinki to introduce Falun Gong and expose the Chinese Communist Party's (CCP) ten-year persecution. The park is a popular place for locals and tourists. The practitioners hung banners that read "Falun Dafa is good" and "Stop the CCP's persecution of Falun Gong", set up poster boards and handed out flyers and newspapers. 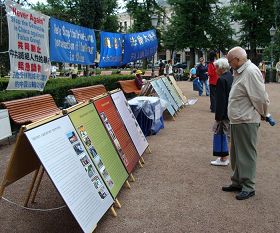 On square of the famous Helsinki Cathedral, the practitioners also held activities to expose the persecution of Falun Gong and promote quitting the CCP and its affiliated organizations.

A local resident said he had seen Falun Gong practitioners' events there during the past several years. He said, "You do valuable things here. What you do is important as long as there is the persecution by the CCP regime in China."

A boy Rafael viewed the poster boards and came forward to sign the petition calling for an end of the persecution.

Jenny, a tourist from England, was shocked at the brutal persecution in China after viewing the posters. She did not know that the CCP was so cruel. She asked for more information about Falun Gong and the persecution. She said she strongly supported Falun Gong practitioners.

A couple of Russian tourists said emotionally to the practitioners, "We know what has happened in China and that the CCP is evil. The CCP uses its army to kill innocent people. The CCP should be destroyed." They also said, "You must keep going."