Germany: Spectators of a Torture Re-enactment Sign a Petition to Condemn the Brutal Persecution (Photo) 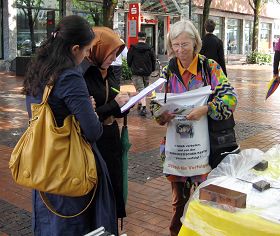 Learning the Truth Behind the Persecution

Though it was raining, some Germans held umbrellas and listened to information about the persecution of Falun Gong.

One German said, "The German government should stand up for Falun Gong." One German who is working for a university took some Falun Gong truth clarification flyers and said he would give them to some Chinese students he knows. Some Germans asked where they can learn the Falun Gong exercises. Two Chinese students agreed to quit the Chinese Communist Party (CCP) after learning the truth.

A man from Sri Lanka signed the petition and said he would tell other Sri Lankans working and living in Germany about the persecution.

Three young men signed the petition without any hesitation when they learned about the persecution. They took extra flyers for their friends.

Feeling the Compassion of Dafa Practitioners and Condemning CCP Persecution

A German who has done Yoga for over twenty years said that he could see that Falun Gong is a peaceful meditation. After reading the Dafa introduction and the display boards exposing the persecution, he signed the petition and said, "There are lots of good traditions in Chinese culture, for example, how to get along well with other people. It is such a shame that the CCP has destroyed these traditional values."

An older German couple said they had experienced the terror of the East German Communist Party and they firmly believed that the organ harvesting of living Falun Gong practitioners is happening in China. When mentioning about the communist party history, they said, "It is such a terror to live under the communist regime."

A young couple with a two year-old child wanted to know more about the persecution of Falun Gong practitioners in China. When the couple was talking, the young child went to the torture re-enactment cage and gave his food to the practitioners sitting in the cage.

Another compassionate older German lady really wanted to know what Falun Gong was and why it is persecuted in China. Upon learning the facts, the lady was very touched.

This German lady concluded, "The world will become better if everyone treats others as Falun Gong practitioners treat others."

“California State Assemblyman Writes to President Obama: We Should Speak out on Behalf of Falun Gong Practitioners”