In 1992, Mr. Li Hongzhi, the founder of Falun Dafa, started a series of nine-day lectures in China to teach people about the practice. Seventeen years later, more than 100 million people worldwide are practicing Falun Gong. Now, around the world, there are still nine-day classes held periodically to teach people about Falun Gong and the exercises by playing Mr. Li's videotapes.

In July, 2009, while schools are having summer break, the nine-day class in Taoyuan, Taiwan, is especially full. There are new and veteran practitioners, mothers and children, grandmothers and grandchildren. 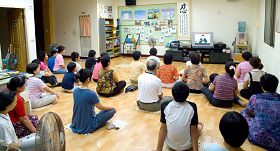 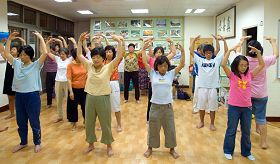 Doing group exercise after the lecture.

Experience the Beauty of Falun Dafa

Ms. Lin is 64 years old. She used to practice Buddhism and exercise on a daily basis. She had heard about Falun Dafa but did not start practicing until two months ago. She happened to meet a practitioner at a group exercise session who introduced her to Falun Dafa. She was surprised that she had been persistent in the practice. 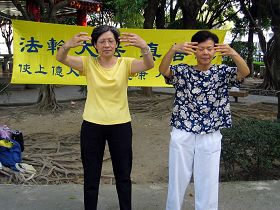 Both Ms. Lin (left) and Ms. Lu's families practice Falun Gong. Now they have learned the practice themselves.

When Ms. Tu was in the US, her husband had some experience with Falun Gong. After they moved back to Taiwan, her husband looked for a group practice site and continued the practice. She did some other exercise initially but as the pain in her knees worsened, she started to practice Falun Gong. She joined a nine-day class in July and, since then, she has slept better that she ever had and her knees got better.

Later she went back to the exercise she was doing before because of a friend's invitation. Her knees started to hurt again. She knew that she could only do one practice and she chose Falun Dafa. Her health improved a lot. She liked the teaching of Truth-Compassion-Forbearance and was glad to know a group of people who do not judge.

Mr. Cheng is a cook. He looks a lot younger than he is. He attended the nine-day class at 7:00 a.m. so he could go to work at 10:00 a.m. His mental and physical health got much better after he practiced Falun Dafa. His arms are no longer tired after cooking all day. He used to be exhausted after a little walk, but now he can go shopping easily. His wife was amazed by his changes and became interested in Falun Gong. 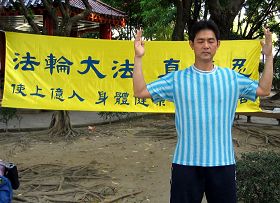 Mr. Cheng used to love sports. One day when he was exercising in a park, a practitioner invited him to join a group exercise session. He felt wonderful and comfortable immediately after he did the exercises. Later he learned it was the energy field that made him feel that way. He felt a Falun turning in his lower abdomen when he first joined the nine-day class. The very next day he did the full lotus meditation for forty minutes. On the third day he could sit through the hour-long meditation. He had diarrhea on the fourth day, and after that he felt light and comfortable. One night when he was asleep, he felt an electric current going from his head to toe and felt terrific afterward. Later he knew it was "Guanding."

Mr. Cheng used to ache a lot after standing and cooking in a hot kitchen all day. Now he does the exercises everyday, and his lower back disc problem stopped bothering him. He did not used to like his boss. After learning the teachings and giving up his attachment, he befriended his boss once again.

Ms. Yuemei remembered back in 2006 when she took her father in a wheelchair to a nearby park. They heard drumming from Falun Gong's waist drum team rehearsing "Falun Dafa Is Good." To her surprise, her father, who was severely ill, responded to the music and started to tap his hand with the rhythm. Ms. Yuemei said that her father never responded to other music. When she inquired about the music, a practitioner invited her to learn the exercises. She started learning the exercises and the teachings right then. 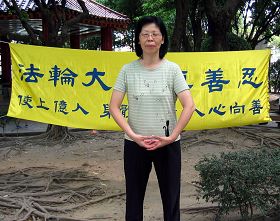 Ms. Yuemei's is no longer hunchbacked and does not feel sleepy during the day. Her temper improved a lot--even her husband was impressed with Falun Gong. Riding a bike is easy for her now. Her skin is not dry anymore, and her nails and skin are very smooth. She is glad that she can do the full lotus meditation now and hopes that she can improve in the practice more diligently.