The Edinburgh International Art Festival, held in August every year, has long been famous, with live performances in theatres and on the street, attracting lots of local residents and international tourists to this Scottish capital. The main streets and tourist attractions are especially crowded. 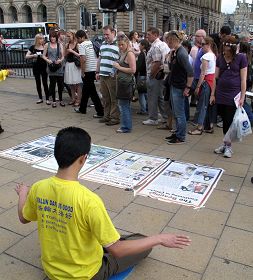 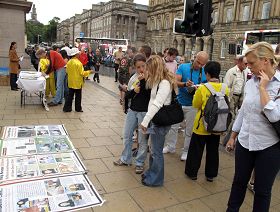 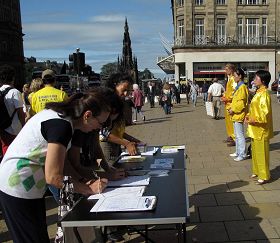 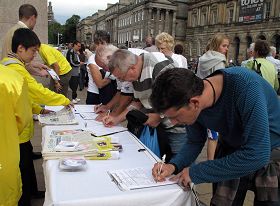 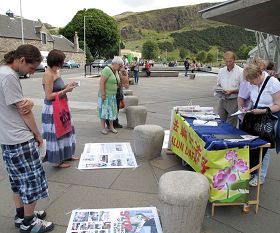 Outside the Scottish parliament, many people learned about Falun Gong

The local practitioners chose three high traffic locations to hold their activities, including the St. James Centre on Princes Street, the Scottish Parliament, and High Street next to the famous Edinburgh Castle. The Scottish Parliament was located on the route and was the final destination of the parade.

Alongside the banners and the display boards, some practitioners were demonstrating the Falun Gong exercises, some were distributing materials, and some were talking to visitors in more detail and encouraging people to sign the petition.

The Scottish Parliament was opposite to the Scottish Palace, and a lot of international tourists were milling about. A pair of students among the many visitors to the display were moved by the news of the persecution and said, "You are doing a great job and we wish you great success."

There were also some tourists from Mainland China who passed by. Some of them were moved by the practitioners' compassion and accepted materials such as the Nine Commentaries on the Communist Party, etc., while for some it was their first time to approach Falun Gong practitioners. 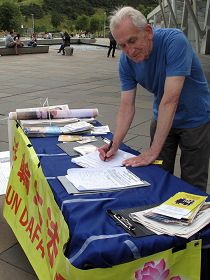 Peter said, "It is very basic to ensure people's freedom of belief."

After signing the petition, a Scottish man named Peter said that he had seen Falun Gong in the Edinburgh Festival Parade several times. He said, "It has been such long a time [that the persecution has continued]. The CCP is really not understandable. It is very basic to ensure people's freedom of belief."

The two Scottish women who were with Peter signed the petition as well. One of them commented, "'Communist Party' means dictatorship and violence. I would remind people that communist China could possibly become a threat to freedom for the whole world." 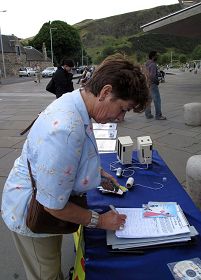 Jenica said, "People should have the freedom of belief."

When the Falun Gong practitioners were about to finish the activity in front of the Scottish Parliament, a woman approached the group. Her name was Jenica and she lives in Edinburgh. She had seen Falun Dafa practitioners in the parade that afternoon. She said to a practitioner with a serious expression, "Why should such a peaceful exercise be persecuted? They (the CCP) are really afraid of people having their own thoughts and beliefs? People should have the freedom of belief!"