(Clearwisdom.net) Munich, the largest city in Southern Germany, is a well-known historical city. It attracts many tourists from around the world. The Marien Platz in the city centre is especially crowded. On August 9, 2009, Falun Gong practitioners from the German State of Bavaria held an activity at the Marien Platz, exposing the Chinese Communist regime's persecution of Falun Gong. The activity attracted many tourists and local German residents. 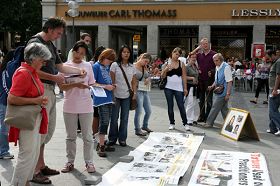 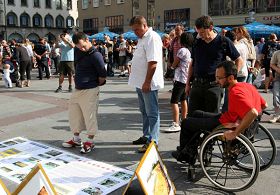 The graceful exercise movements by Falun Gong practitioners formed striking contrast with the posters depicting the Chinese Communist regime's persecution of Falun Gong. People were very shocked by the brutal methods used by the regime against Falun Gong practitioners. Many people asked how, in today's civilized society, such evil could still exist. They signed the petition calling for the end to the Chinese Communist regime's persecution of Falun Gong. Some people learned the Falun Gong exercises during the activity while others asked for information about Falun Gong exercise sites. 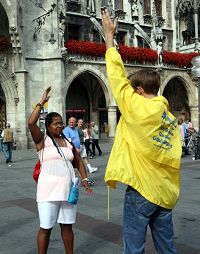 There were also many tourists from Mainland China. Most of them spent a long time at the information table reading posters and watching the Falun Gong exercise demonstration. Some people announced their withdrawals from the Chinese Communist Party and its affiliated organizations. 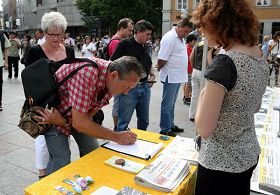 "I just saw the posters depicting the harvesting of organs from living people. It is truly horrific and incomprehensible. We must do whatever we can to stop this persecution," Ms. Haeuser, a civil servant from Stuttgart, said to the reporter. She had just signed the petition calling for the end to the Chinese Communist regime's persecution of Falun Gong. She was with Mechanical Engineer Mr. Volker Beer. Mr. Beer said: "I think we must get rid of the Communist Party and respect human rights. Unfortunately our politicians put human rights and human dignity in the second place for the short-term benefit of money and power. It is really regrettable." Ms. Haeuser continued, "People are mostly not aware of these things. Politicians don't discuss these issues. It seems everything is ok on the surface. But if people lifted the curtain, they would see these terrible things. These things are appalling. I am really shocked." 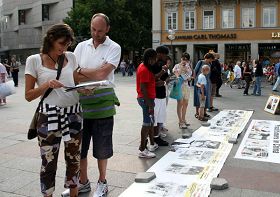 An Italian woman (left) hopes that Chinese people will understand the truth about Falun Gong.

Mr. Hsu from Taiwan, whose family once suffered the Chinese Communist regime's persecution and later luckily escaped, said: "Although I don't practise Falun Gong, I think it is too extreme for a political Party to suppress Falun Gong in such brutal way. It is completely unnecessary. Fighting is not the natural character for the existence of humankind. We need mutual help and cooperation. Fighting is only the tool for dictators to maintain their power. There have already been many such examples in the world. There is no single communist country in which people have basic human dignity." Mr. Hsu also said that the unscrupulous behaviour of the Communist Party is very rarely seen in today's world. "Atrocities such as harvesting organs from living Falun Gong practitioners are really inconceivable and are well beyond the boundary of human civilization."

Ms. Kanavakis worked at a bookshop before her retirement. Her hometown was in the former East Germany. She felt very fortunate when she came to West Germany before the Berlin Wall collapsed. She said: "Although I am old now and my influence as an individual is very small, I will do my best to oppose this kind of injustice and violence in the world."

Many Chinese tourists showed great interest in the Falun Gong activity. Two elderly gentlemen from Shijiazhuang in Hebei Province watched the exercise demonstration for a long time. They said that they already understood that Falun Gong is good. They felt it is really incomprehensible that the Communist Party banned Falun Gong and arrest Falun Gong practitioners. These two gentlemen announced their withdrawals from the Communist Party at this event.

“France: Exposing the Persecution to People in Boulogne-sur-Mer (Photos)”