(Clearwisdom.net) Mr. Du Shiliang, a 50-year-old practitioner from Hailin City, Heilongjiang Province, died as a result of persecution in the Jianshanzi Prison of Mudanjiang City, Heilongjiang Province on January 20, 2006. Before his death, his family visited him on January 13, and he appeared to be in normal physical condition. After his death, when his family asked to take his body, the chief of the Prison Guard Section Li Xiangdong said, "Du Shiliang is still serving his sentence. He has to continue to serve his sentence, even if he is dead, so you can't take his body." Later, his body was cremated by police from the Domestic Security Division of the Hailin City Police Department, including Jiang Yuntao and Na Yongsheng. They forced all of the victim's family to sign the cremation document on the spot.

The following is a photo of Mr. Du while he was held in the prison. 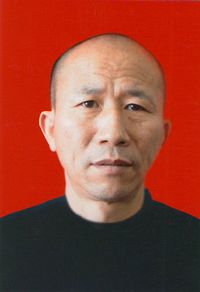 Before he practiced Falun Gong, Mr. Du suffered from gastric polyps, a precursor to gastric cancer, for many years. The large amount of money spent on his medical treatment worsened the living conditions of his already-poor family. At a critical moment, he found Falun Gong, and he recovered from his illness in only a few months. In late January 2002, Song Yumin, chief of the Domestic Security Division of Hailin City, along with police officers Jiang Yuntao and Jin Haizhu, broke into his home and arrested Mr. Du and his wife. Then the police sent them to the Hailin City Detention Center using the excuse that they had Falun Gong truth-clarification materials at their home. On July 2002, Mr. Du clarified the truth about Falun Gong and announced his belief in Falun Gong in the courthouse, for which the chief judge extended his imprisonment term from three years to six years.

During 2002 and 2003, prison guards and prisoners from the Third Ward of the Mudanjiang Prison, in their attempts to "transform" Mr. Du into giving up Falun Gong, forced him to perform overly intensive labor and tortured him with sleep deprivation at night. Prisoner Shen Congfu was involved in cruelly beating him many times. Mr. Du was forced to perform intensive labor up until his death.

When Mr. Du's family went to the Mudanjiang Prison to claim his body, the authorities headed by the Mudanjiang City 610 Office and the prison were extremely cautious. Officers from several governmental departments in different uniforms surrounded the victim's family members. They didn't let the family members to go through until they strongly protested.

“You Can Succeed If You Don't Give Up”