(Clearwisdom.net) In August 2009, Falun Gong practitioners in Finland held events in Helsinki and Pello to introduce Falun Gong and expose the persecution. 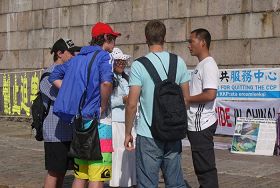 Tourists from other countries learn about Falun Gong 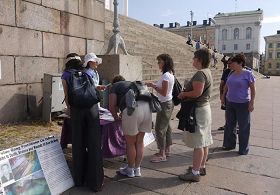 Signing a petition protesting the persecution

At one side of the square in front of Helsinki church Tuomiokirkko, practitioners held banners and set up poster boards. They also collected signatures to condemn the CCP's brutal persecution of Falun Gong.

There were many tourists on the square since it was the weekend, and the event caught their attention. Many came forward to listen to practitioners' explanations and view the poster boards to learn the facts.

Several Chinese tourists talked with the practitioners. One student listened to a practitioner's narration of personal suffering experience as a result of the persecution in China. He was shocked because he had never heard about such things before. What he did know what that the CCP had staged the Tiananmen self-immolation. He said he knew that many of the CCP's reports were fabricated. He believes that Falun Gong practitioners are good people. 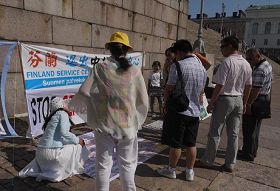 The practitioners also held their poster boards window-high beside a bus full of Chinese tourists. On the boards was information that Falun Gong has spread to more than one hundred countries and that the CCP brutally persecutes innocent practitioners.

In Pello, Finland, practitioner Ms. Jin collected signatures to rescue her mother. In 2007, she came to Finland to visit her relative. Her mother was arrested in China for practicing Falun Gong and was unlawfully sent to prison for an eight-year term. Ms. Jin cannot return to China. Finland media reported this incident. Her mother is still imprisoned in Xinxiang Women's Prison and is not allowed to be visited.

Many Finns saw the news and came to sign her petition. Some even wanted to donate money, but Ms. Jin declined. She said she hoped everyone would understand the facts and help rescue her mother and all Falun Gong practitioners being imprisoned in China. Many said that they would the browse Falun Gong websites and pay attention to the issue.

“Solemn Declarations from Non-Practitioners Who Have Awakened to the Truth”