(Clearwisdom.net) From July 27 to August 2, 2009, Falun Gong practitioners in Denmark went on a car tour around eight major Danish cities outside of Copenhagen to introduce Falun Gong, also known as Falun Dafa, a cultivation practice based on the principles of Truthfulness-Compassion-Forbearance and to clarify the truth about the persecution in China. 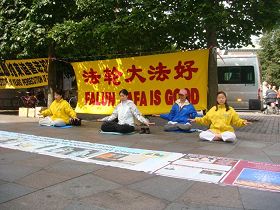 Once, when the car tour reached Odense, a reporter from the biggest newspaper in Fyens, Fyens Stiftstidende, came to do an interview. The next day, a report entitled, "Falun Gong: we are being persecuted" had this to say, "Yesterday, Falun Gong practitioners in yellow T-shirts held an appeal at Flakhaven. We learned that the members of this spiritual movement are still being persecuted in China. They distributed leaflets, and gave out information about Falun Gong and the problem with the Chinese regime." 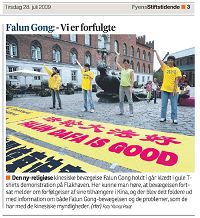 Fyens Stiftstidende, published a photo report on the persecution of Falun Gong by the CCP

The practitioners met many pre-destined people. Some asked how to learn the practice, carefully taking down contact details and the Internet address for finding out more about Falun Gong. Some started to learn the exercises on the spot.

The following day, while in Fredericia, a dozen school children were on their way home. Seeing the practitioners demonstrating the exercises, they came over and imitated the movements. One boy could quite naturally sit in the double lotus position, and he quickly learned the fifth exercise. Language barriers did not stop a brother and sister from Germany from learning the movements for half an hour. 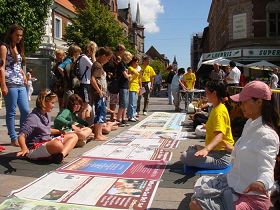 Having heard the introduction of Falun Gong, two girls asked, "Could we give out your leaflets?" When given the OK, they happily took a pile to hand out to nearby shops. Afterwards, they came for another batch. 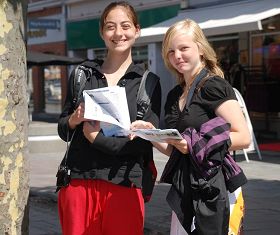 Two girls take initiative to give out Falun Gong leaflets

On the third day, the car tour arrived at Esbjerg, traditionally a fishing town in the Jutland Peninsula and now an industrial city. The weather was rainy. A girl of Mexican descent stayed for two hours at the practitioners’ stand. She carefully learned all five exercises. When she finished learning the first two exercises and started to learn the fifth exercise, she could not sit in the double lotus position. But when she finished learning the third and fourth exercises and reviewed the fifth exercise, she quickly managed the double lotus position. 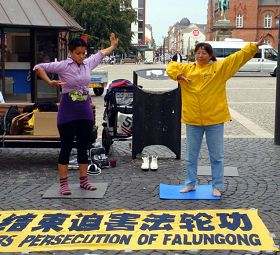 Girl learns to do the first exercise

On the fourth day, the car arrived at Herning, where there was a downpour. There were few people in the streets. Still people with pre-destined relationships came for Falun Gong. Eddi, who was studying Chinese acupuncture, was very interested in Chinese culture and understood virtue and karma from Buddhism. That day, he and his wife passed the stand with their baby in a stroller. With intense interest, they learned about Falun Gong and the persecution in China from practitioners. They promised to carefully study the materials given to them.

Soon, the couple returned to the stand and asked how to learn the practice. When they heard that practitioners would only stay there for that day, they were very disappointed. Then Eddi changed his plans and learned the practice straight away. The rainstorm became stronger and stronger. At a temporary stage nearby that provided somewhat of a shelter, Eddi learned the first four exercises and bought copies of Falun Gong and Zhuan Falun in Danish. 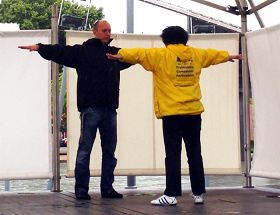 People queued up to sign the petition against the persecution

During the car tour practitioners used a petition form to be handed to the Danish government. Wherever they went, a lot of people would come forward to sign, calling on the Danish government to help stop the CCP’s persecution of Falun Gong. Sometimes people even queued up to sign their names. 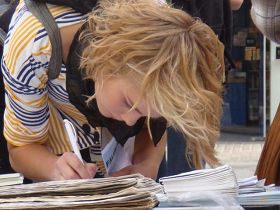 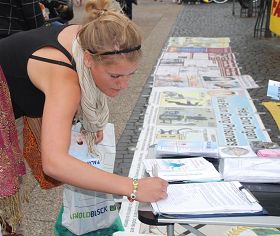 On the fifth day, at the scenic city of Silkeborg, practitioners stayed for only the morning. When people saw the peaceful exercise demonstration and learned that such a gentle practice is banned in China, they were incredulous. A passer-by commented, "What is not banned in China! Only doing bad things is not banned."

In the afternoon, the practitioners arrived at the second largest city, Aarhus. Practitioners clarified the truth in the city centre. Here, many people signed the petition without hesitation. On several occasions people formed queues to put down their signatures. 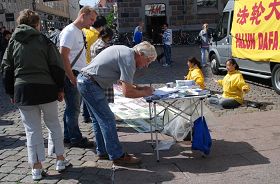 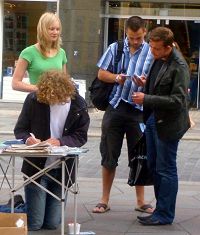 On the sixth day, practitioners came to the fourth largest city in Denmark, Aalborg, and held an event near an amusement park at the city centre, Karolinelund. Having learned the truth, the actor who played the traditional amusement park clown, Pjerrot, signed to condemn the CCP’s persecution and wished practitioners good luck.

An amusement park train full of tourists stopped by the stand. The passengers happily accepted truth clarification materials. Having seen the photos, a Danish lady said, "What's happening in China is terrible. Let’s work together and hope things will improve."

“A Respected Teacher in Guangzhou City, Guangdong Province, Was Arrested ”