(Clearwisdom.net) On August 9, Falun Gong practitioners performed at a parade in Woodbridge, New Jersey, invited by the Asian American Association.

The Divine Land Marching Band led the Falun Gong practitioners' entry. Practitioners also demonstrated the exercises. Many people accepted the truth-clarifying materials that were being handed out. 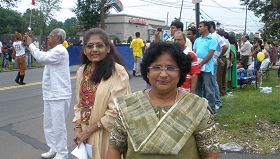 Seventy-three-year-old Mr. Li demonstrated exercises. He said, "I was not performing. I was demonstrating the best exercises to people. Based on my 10 years of experience of cultivating Falun Gong, I know that one can gain the best if he or she follows the principle of Truthfulness-Compassion-Forbearance."

Billy, a Thai Falun Gong practitioner, said, "Many residents here are from India. They understand the concept of cultivation and agree with the principle of Truthfulness-Compassion-Forbearance."

Mr. Liang, the person in charge of the Divine Land Marching Band, said the Asian American Association invited practitioners to the parade. "They didn't understand why there were conflicts between Chinese people and Falun Gong practitioners. After learning the truth about Falun Gong and the persecution, they recognized the evil nature of the Chinese Communist Party," said Mr. Liang. "Falun Gong practitioners are not involved in politics, but they do demonstrate traditional Chinese culture, so the Asian American Association invited us to the parade, which was organized mainly by Indian-Americans."

“Firmly Believing in Master and the Fa”