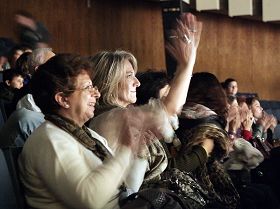 Mr. Thanabordee Joothong, the Second Secretary of the Royal Thai Embassy in Buenos Aires, and his wife, were happy to share their impressions of the Shen Yun performance on July 3, 2009. "It's very delightful, very wonderful," said Mr. Joothong and also agreeing with his wife when she said: "I think it is very nice, very lovely."

Mrs. Joothong was familiar with Chinese culture, having previously been to China. "When I was young I had to study the Chinese language because my grandfather comes from China. So I have a Chinese name," she said.

She particularly enjoyed the dance "Welcoming Spring" with the fans. "I felt light and refreshed."

A feature of the Shen Yun performances is classical Chinese dance. It is part of the divinely inspired heritage that is China's five-millennia-old culture, and one means by which that culture lives on.

Mrs. Joothong appreciated the way the dancers always smiled and Mr. Joothong enjoyed the costumes, commenting on the wonderful colors and that they were "very pretty."

He also enjoyed the state-of-the-art 3D digital backdrops displaying animated images which provided a vibrant background to each performance.

"I think the best part of the show ... I like the whole backdrop, how they kind of connect the performance with the pictures and the slide projection. It makes it more interesting," he said, with his wife agreeing.

Mr. Joothong has seen Chinese performances before, but had not seen anything like Shen Yun. "I went to China [and saw some shows], but they were not this kind of ... not this big scale, not as many performers. So I like the whole idea. It is very innovative the way they use the projected images, I really like it.

"And actually I really enjoy the singing ... I can read Spanish a little bit. But I really admire ... I really appreciate the singing.

They both commented on the spiritual aspect of the show and the theme of the Buddha and the Buddhist principle of reincarnation, saying they saw that in the piece "Heaven Awaits Us Despite Persecution," in which a father is persecuted to death for his belief in the spiritual practice of Falun Gong, and how he then went to heaven.

"I think that is kind of related to us, because Thailand, we are a Buddhist country, so we can relate with the whole idea that they are reincarnated to heaven after life," he said.

Mr. Joothong was going to encourage his colleagues and friends to also come and see Shen Yun.

"I am quite impressed that a lot of people showed up tonight. So, I think what they [Shen Yun] are doing, they are already doing a good job!

Writer: Shen Yun dancing is a rare beautiful scene in the world

Mr. Eduardo Perth Reston is a well-known writer and editor. Talking about the Shen Yun performance on July 3, Mr. Reston said, "I really like the Shen Yun performance. The dancing is so beautiful, especially the female dancers dancing together. It is a rare and beautiful scene in the world. Very splendid and magnificent. I also like the dancing in 'Loyalty of Yue Fei'. This is a perfect, superb show."

When the big curtain was opened for the prelude , "The Five Millennia Begin", a splendid scene suddenly appears before audience: in Heaven, the various Buddhas, Daos and deities, sing, dance, or perform their respective roles. Mr. Reston enjoyed the sacred, solemn and splendid heavenly paradise.

Among all dance programs, Mr. Reston sorted out his most favorite, "I also like the Tibet dancing 'Dance of The Snow-Capped Mountain' and the program in which the dancers held ribbons 'Knowing the True Picture Offers Ultimate Hope'. I like all of them."

All the way from Germany, Ms. Tor expressed her thorough enjoyment with the Shen Yun Performing Arts show at the Auditorio Belgrano on July 3.

Ms. Tor is a ceramicist and a trained psychologist. She found much in the spectacular that resonated with her appreciation of art, form and color. "I am very impressed with the intensity, and the physical training that they have, with the elegance and everything within their form of dance," commented Ms. Tor.

"More than anything I like the choreography of the colors, which is something very, very lovely and very special."

"I was really taken with the drums, with the rhythm that they have, and the vibrations that are transmitted so intensely. The combination of movement with dance is also something that I liked very much."

The female dancers projected "elegance, happiness, gentleness," she said. "It was very good; very good and I am left wanting to see more."

Shen Yun Performing Arts will have four shows on July 4 and 5 in Auditorio Belgrano theater. The times are:

“Ten Years of Minghui Has Brought Light and Wisdom All Around”