(Clearwisdom.net) The city of Calgary in western Canada is famous for the Calgary Stampede, a huge agricultural fair and rodeo held every July for 10 days. The Stampede is now almost 100 years old and bills itself as "The Greatest Outdoor Show on Earth". On July 3, a grand parade opened the festival. There were 170 processions in the parade, which lasted three hours. There were about 350,000 spectators along the parade route and two million TV viewers. The Falun Gong entry not only included practitioners living in the Calgary area, but also many from other provinces and even from America and Taiwan. 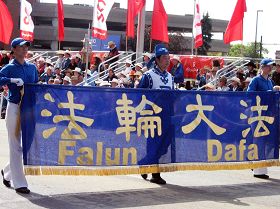 This was the second year for Dafa practitioners to participate in the Stampede parade. Besides the celestial maiden dancers, there was a float, a waist drum team, and the Divine Land Marching Band, consisting of one hundred musicians, made its first appearance in Calgary and amazed the spectators. The band wore costumes inspired by the Song Dynasty in blue and white, pure and gentle. They played the music 'Falun Dafa is great', which captivated the spectators. Though there were several dozen bands in the parade, the Divine Land Marching Band was unique.

The celestial maiden dancers and the lotus float followed the band. In center of the lotus flower on the float was a smiling young lady wearing Tang costume, waving to the spectators.

The waist drum team was at the end of the procession. It was the only group in the whole parade that played without stop in the three-hour parade.

"Wonderful," "Amazing," was heard from spectators when they saw the unique Falun Gong contingent. It was the first time for some spectators to experience Falun Gong, and they expressed their appreciation.