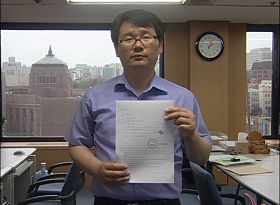 Mr. Jin represented civil Christian groups, including Christian Social Responsibility and the Advanced Civil Movement. He called the press conference. He said that, based on the laws in Korea, the county could issue temporary entry permits to those who have not obtained refugee status based on humanitarian considerations.

Mr. Jin said in an interview that it was very important now to discover Mr. Wu's whereabouts, because his life could be in danger. He has asked the Department of Justice to find out Mr. Wu's whereabouts through the Ministry of Foreign Affairs and to ensure his safety.

After the press conference, Mr. Jin delivered a statement to the National Human Rights Commission of Korea. He said, "I am here today to tell the Commission of the grave mistake made by the Korean government. Although Mr. Wu is of Chinese nationality, this human rights violation took place in Korea. I call on the Commission to conduct further investigations and make public what it finds."

Mr. Jin stressed that Christian groups in Korea would continue to protest and appeal to make sure of Falun Gong practitioners' safety.