Member of European Parliament Gerard Batten is a member of the English Independence Party. He was invited to take part in a rally in Parliament Square to mark the tenth anniversary of Falun Gong practitioners' resistance to the persecution. 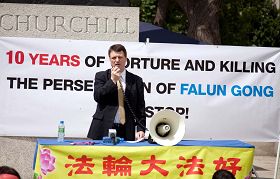 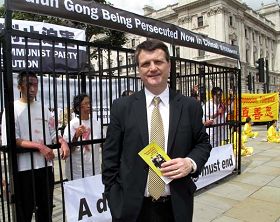 Mr. Gerard Batten having his photo taken with those re-enacting CCP torture

He said in his speech: "Why are the Falun Gong being persecuted in China? The answer is very simple, it's because of what they stand for. Their three core values are Truthfulness, Compassion and Tolerance. These are the exact opposite of what the Chinese Communist Party stands for, which are lies, brutality and intolerance." "The fact that they [the CCP] are the most brutal tyranny in the history of Communism may have something to do with why they still survive as long as they have. But you cannot crush the human spirit forever....Marxism, Marxist-Leninism, and Communism are all inherently and fundamentally evil. They go against the basic properties of human beings and what they strive for, which is freedom, freedom of expression and the right to live their lives the way that they choose.... The people who speak out against it--like Falun Gong practitioners and others--are unbelievably brave. To stand up in China and say what you think when the result may be torture, imprisonment, or even death takes a kind of bravery that is very difficult for us who live in a free society to understand...... People are standing up against it, and the more that speak out, by example, the more people will follow, until you have in China what we've seen across other Communist states when so many people stand up and are opposed to it -- that eventually it crumbles and will fall apart."

Mr. Batten said in an interview with reporters: "I very much understand what Falun Gong practitioners are doing, because you believe in Truth, Compassion, Tolerance. This is completely the opposite of the CCPs' lies, ruthlessness, and inability to tolerate other people--the CCP cannot tolerate the truth. The biggest danger is that the CCP cannot tolerate any other alternative belief or any belief, so it inevitably wants to control all religions and spiritual movements."

Recollecting when he first came into contact with the truth of Falun Gong, he said, "I have always understood the situation of Communist countries, including, of course, the situation in China. In 2004 after I was elected to be a member of the European Parliament, a Falun Gong practitioner contacted me and explained to me the true situation of Falun Gong. Of course, I also read Nine Commentaries on the Communist Party. I had heard some things about what was happening in China, but peoples' testimonies based on personal experiences enabled me to understand what really happened there. I now know that for people to stand up and speak out in a country like China requires immense bravery. We live in a free country, so it is easy to forget the preciousness of the freedom that we enjoy. So I think that for me to speak for Falun Gong in public is the least I can do."

Speaking about how the persecution has gone on for ten years and the question of how only by dissolving the Communist Party can the persecution be stopped, Mr. Batten said: "I believe it will happen in the end. All the autocratic regimes will die out because tyrannies cannot be allowed to exist for long. The evil CCP has been very savage in order to linger on in a steadily worsening condition. More and more people are quitting the communist party because people don't believe in it anymore. Even communists don't believe in communism anymore. Let us all be clear about this: the communists are just interested in preserving their own political power. In Chinese history there were many tyrannies that reigned, but after one dynasty's emperor left that the new one would come. The time for the autocratic system of the Chinese communist party to fall from power has come."

As he left the rally Mr. Batten had a photo taken with those re-enacting the CCP tortures.

“UK: Rally Held on Parliament Square to Commemorate the 10th Anniversary of the Persecution (Photos)”