The Clearwisdom/Minghui website is now ten years old. Despite constant attacks, hardship and dangers, the website plays an important role in validating the Fa because of the efforts of all Falun Dafa practitioners who play a part in it in some way.

The website is a bond that ties millions of practitioners together in an effort to uncover the facts about the persecution of Falun Gong. The website reports the CCP minions' evil conduct, clears up misconceptions about Falun Gong and assists Master to save sentient beings. It is also a forum to share experiences about validating the Fa so that practitioners can help each other in many ways. Much that is published on the website requires effort by Dafa practitioners worldwide and bears witness to the mighty virtue of Dafa and the process of Dafa practitioners' walking their path towards consummation.

Ms Yanmei Liao started practicing Falun Dafa in December 2001 and gained physical and mental health. Once she realized that the persecution of Falun Gong is inhuman and brutal, she became a team member of the China telephone-calling group. They telephone people in China to clear up misperceptions about Falun Gong and negate the persecution. Ms. Liao suggests that Clearwisdom is the foremost tool that helps her to persist in her efforts to achieve justice for Falun Gong. 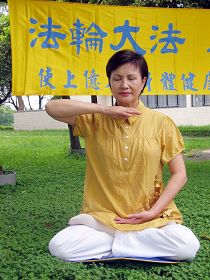 Since practicing Falun Gong, Ms. Liao looks younger than her age. It is difficult to believe that she is sixty-three years old.

She remembers that at the beginning of her cultivation, her family did not own a computer. Fellow practitioners printed articles from the website for her. Slowly she came to understand the true meaning of cultivation. After some time, she joined a team of practitioners that telephone China to clear up misperceptions about Falun Gong. Visiting the website became a daily routine. She especially pays attention to "News and Events around the World" and "Accounts of Persecution."

Ms Liao said that Clearwisdom is a platform that brings Falun Gong practitioners together. While being involved with the rescue of arrested and detained practitioners in China, she realizes that it is very difficult to obtain phone numbers in China. Therefore, she came to truly cherish the first-hand information from Clearwisdom.

It helped her tremendously when she heard that practitioners were released from detention. Such information is an inspiration for Ms Liao and others, and spurs them on to continue in their efforts.

She also shared that sometimes she was not diligent and at those times she experienced problems when calling China and clarifying the facts about the persecution of Falun Gong. She visited the website and read many experience sharing articles. This helped her solve her problems and get back on track. She said, "If there was no Clearwisdom, I would not do that well."

Clearwisdom Points to the Ills in Society

Practitioners of different ages can learn from experiences shared on Clearwisdom. Some could learn to look at issues from the Fa's perspective, others discovered attachments and what they had done wrong and they thus improved and changed their ways. Some youth practitioners stayed away from the cyber world after reading articles on Clearwisdom.

Young practitioners that are busy with studies could follow the course of the Fa-rectification through Clearwisdom. Yijun Li is a high school student about to take the University entrance exams. Two years ago, she started practicing Falun Gong on her teacher's recommendation. She used her 30-minute lunch break to study the Fa or do the exercises. Then, she wrote down her experiences and had it published on Clearwisdom.

With teacher's encouragement, she visited Clearwisdom very often and read the experiences shared by fellow practitioners. This helped her realize the difference between cultivating and not cultivating and taught her the seriousness of cultivation. She changed her life style and no longer had sexual relations. Besides, she became strict in upgrading her xinxing, and made peace with her father. Noticing her changes, Li's mother and sister also began to practice Falun Gong, resulting in a good family relationship. Li appreciates Clearwisdom that helped her improve, learn so much and provided such a good environment.

There are so many examples like this. Practitioners work in different industries, yet, Clearwisdom provides practitioners with a platform to obtain the Fa and practice cultivation.

Mr. Chen works for a private company and is exposed to a high-pressured environment. Except for some major activities, he could rarely attend local Fa study groups. But, he visited Clearwisdom daily. Several days ago, he realized that practitioners in China rescued others who were illegally imprisoned with righteous thoughts and righteous actions. This sudden realization helped him find the deeply ingrained attachment to comfort. When he recognized that some fellow practitioners were reciting the Fa he was reminded to try harder.

Despite Being Attached to Sickness, Clearwisdom Helped Her Obtain the Fa

Clearwisdom helps those with a predestined relationship to Master Li, such as Miss Liao Peiru.

Now, after obtaining the Fa, Miss Liao is an English teacher at Shulin high school. She got married recently. When she was talking about how she obtained the Fa, she still could not conceal her excitement and gratitude. Just one essay on Clearwisdom lead her to find the Fa and saved her from despair. 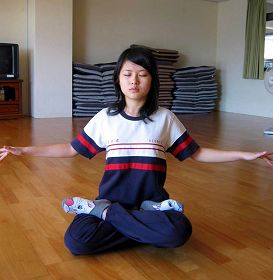 In 2004, she was 25 years old and attended the doctoral program at Purdue University in the U.S. She came down with rheumatoid arthritis and was unable to pick up her chopsticks.

Thoughts of a life filled with pain, without any hope of cure and large medical bills made her lose hope and she thought of suicide. She decided to fly to the Grand Canyon and jump out of the airplane. She wrote her will and booked the ticket online.

She once more surfed the Web for articles on rheumatoid arthritis. Suddenly, she found an article "Rheumatoid Arthritis Cured Miraculously." She read it. A Chinese Falun Gong practitioner who had suffered from that illness wrote it. She began to read other articles on the website. She read articles that talked about different kinds of diseases, such as cancer, and excessive bone development. The people were cured after practicing Falun Gong. This gave her a glimmer of hope.

One month later, she could sit in the full-lotus position. Her family members and neighbors witnessed her changes and started practicing Falun Gong.

Miss Liao's example is only one of many such miraculous recoveries reported on Clearwisdom.

Learn from Each Other and Make Progress Together

A local practitioner understood that everyone was at different levels, but she had difficulties enlightening to some Fa truths. Reading articles on Clearwisdom helped her raise her understanding and consequently her cultivation level at a much faster rate.

Ms. Chen is a co-coordinator of a truth-clarifying material production site. For her, Clearwisdom is an important tool to improve her understanding of the Fa.

An elderly practitioner, uncle Chen, lives in her house. His hearing is poor and he has a strong accent. He lacked confidence to clarifying the truth to ordinary people. Ms. Chen studied the Fa with other practitioners at a truth-clarifying material production site, and then shared with uncle Chen from the Fa's perspective. Although he could see issues from Fa's perspective, he made no progress. One day, Ms Chen found an experience-sharing article on Clearwisdom by someone that had similar problems as uncle Chen, but he was active in the truth clarification efforts.

Ms Chen printed the article and gave it to Uncle Chen. He was touched. The next day he let go of his worries and was no longer afraid. He worked with other practitioners' clarifying the facts over the Internet. That day, with his help, one precious being was saved. Later on, Uncle Chen even went to Hong Kong to clarify the facts about Falun Gong with other practitioners. 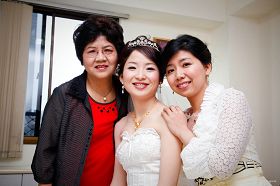 Ms Chunmei Wang is a coordinator of the Taiwan Falun Dafa Association. She visits Clearwisdom. She reads not only "Personal Cultivation" and "Persecution Account" articles, but also "Falun Dafa Worldwide" and the "Photo Archive."

She looks to see what activities are being held in various regions in the hope that her area could hold similar activities. The Clearwisdom Photo Archive inspired and enlightened her to ways of spreading the Fa and exposing the persecution of Falun Gong. "These pictures are a great weapon against CCP rumors."