Edmonton, Canada: Rally Calls for an End to the Persecution (Photos)

On July 18, Falun Gong practitioners from Edmonton held a rally at Wilbert McIntyre (Gazebo) Park, calling for help to stop the 10-year persecution of Falun Gong. Many locals watched the rally and listened to the speeches, and some signed their names to support Falun Gong and to help end the persecution. 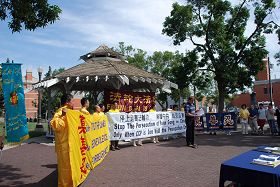 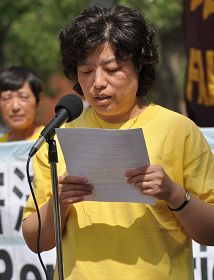 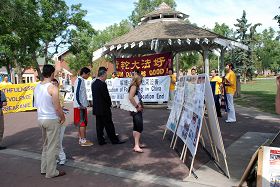 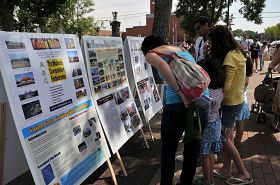 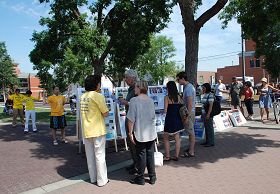 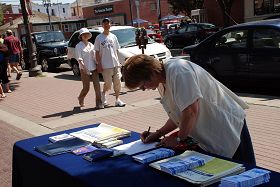 Dr. Liu Minnan, a Falun Gong practitioner, gave a speech, in which she briefly reviewed the history of the persecution. She pointed out that so far, 3,290 death cases have been confirmed, and that between January and September 2008, more than 10,000 practitioners were arrested and 150 practitioners died as a result of persecution.

Dr. Liu said that practitioners have been peacefully resisting the persecution. The Chinese Communist Party is the origin of this disaster, and only its demise can stop the persecution. 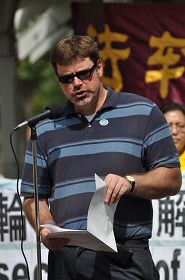 Brent Rathgeber, Member of Parliament for Edmonton, gives a speech

Brent Rathgeber, MP for Edmonton, gave a speech at the rally. He pointed out that Falun Gong practitioners' contributions to peace and harmony of society has been publicly recognized. Practitioners have benefited from Falun Gong physically and mentally, and he thanked the attendees for coming to witness this important date.

He said that the persecution is of concern to Canadians. Canadians respect human rights and promoting human rights as one of the important issues in the Canadian government's foreign affairs policy. 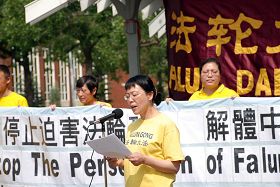 Ms. Shen Jie has been practicing Falun Gong for 13 years. She said that many of her Falun Gong friends in Jiangsu have been tortured. Her friend Zhang Zhenggang was tortured to death in March 2000.

Ms. Shen said that the persecution is going on every day in China. She called upon Chinese people to recognize the evil nature of the communist party and to help stop the persecution.

“Chicago: Practitioners Hold Rally Against the Persecution in front of the Chinese Consulate (Photos)”