On July 18, 2009, Falun Gong practitioners from Pingtung, Taiwan held a series of activities in Eluanbi Park to peacefully protest the persecution in China. 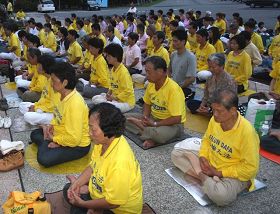 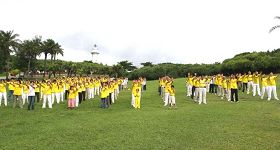 About 200 practitioners did the group exercises in the morning, and then came to the park to clarify the truth to the tourists. Many tourists from China and athletes visiting Taiwan for the World Games 2009 talked to practitioners and expressed their support.

Mr. Chang Suhsing, the organizer of the activity, said that the reason practitioners held activities in Eluanbi Park is because many tourists from China come here, and practitioners want to clarify the truth to them. Mr. Chang called upon the Chinese police officers who have been involved in the persecution to think things over carefully, and not betray their conscience by persecuting Falun Gong practitioners.

Chunrong, a college student who started practicing Falun Gong when she was in the fourth grade, said that the brutality of the persecution is shocking. "We have freedom to practice in Taiwan, but practitioners in China are being persecuted. It is hard to imagine the pressure on them. I admire them for their solid belief and efforts to clarify the truth to people," she said.