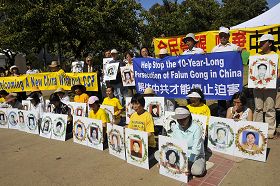 Practitioners from San Diego hold activities exposing the persecution in China on July 11. 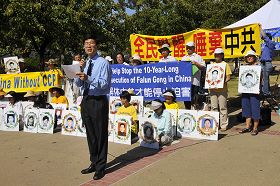 Mr. Li Jian, a Falun Gong practitioner, giving a speech at the rally. 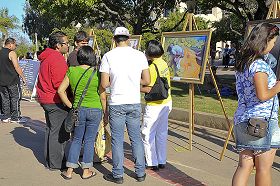 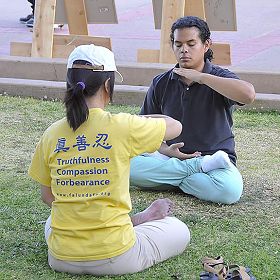 A young man learning the exercises. 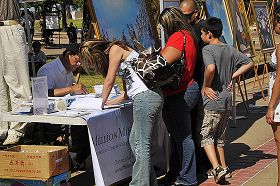 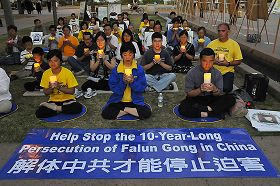 The candlelight vigil in memory of practitioners who lost their lives in the persecution.

Practitioners held banners, calling for an end to the persecution. Part of the day's activities included a section of the Truthfulness-Compassion-Forbearance Art Exhibition, which vividly depicted practitioners' steadfast spirit in the face of persecution. Many visitors viewed the artworks and signed a petition to condemn the persecution.

Dr. Gao Dawei, chairman of the Global Service Center for Quitting the CCP, briefly reviewed practitioners' journey of working to end the persecution over the last ten years. He also said that more than 57 million Chinese people have quit the party since the book the Nine Commentaries on the Communist Party was published in 2004.

Li Jian called upon people to protect the universal principles of Truthfulness-Compassion-Forbearance and to recognize the evil nature of the CCP.

Three practitioners, who were persecuted by the CCP, told their own stories at the rally.

Dr. Geng Sa's wife was arrested in 2001 for practicing Falun Gong, and was tortured to death two years later in Shibalihe Labor Camp in Henan Province. Dr. Geng Sa himself was arrested many times and was badly tortured. During a force-feeding, policemen knocked out most of his teeth.

Ms. Yu Ping from Dalian told the story of her family. Her mother is a practitioner, but her father does not practice. In 2002, her father was threatened by the police because his wife practices Falun Gong. He disappeared. Three days later, he was found in a coma at home, and passed away soon after. In the summer of 2007, Ms. Yu's mother was arrested and was sentenced to 5 years in 2008. She is in a bad situation in prison now.

Joanna Wang's mother was arrested in Anhui and was sentenced to one year in a labor camp.

Ms. Yu and Joanna Wang obtained help from US government officials to rescue their mother. Congressman Chuck DeVore wrote to the Chinese government, asking for the release of their family members.

At 7:00 p.m., practitioners held a candlelight vigil in memory of those who were tortured to death in China. Several visitors joined them to show their support for Falun Gong.