Falun Dafa practitioner Ms. Zhang Dezhen, 38 years old, was persecuted to death a few years ago by the Mengyin County 610 Office in Shandong Province. A very good person died after suffering from continuous brutal persecution by Chinese Communist Party (CCP) authorities. The people in her hometown are often moved recalling her goodness. Her fellow practitioners are often moved to tears remembering her tribulations and suffering. 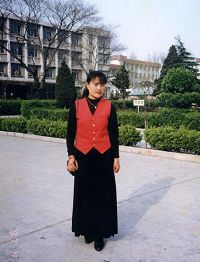 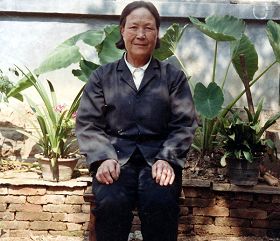 Zhang Dezhen's mother could not withstand the sorrow of losing her daughter. One day in 2003 summer, she went to the Mengyin County 610 Office alone to look for CCP official Lei Yancheng to appeal the justice for her daughter. Lei Yancheng hid and did not dare to see her. In the brainwashing center run by the Mengyin County 610 Office, her mother cried sadly, "You give me back my daughter! You give me back my daughter!"

Zhang Dezhen maintained her belief in Dafa and staged a hunger strike to protest the persecution. The police brutally force-fed her more than ten times.

On January 31, 2003, the doctors again injected the toxic drugs into Zhang Dezhen, which soon caused her death. She did not even have the chance to meet with her family again for the last time. She died at the age of 38.

After the atrocities happened, Zhang Dezhen's families and friends were both saddened and angry. They strongly requested the Mengyin County Judicial Department to punish the murderers according to the law. But several years have passed, and they still haven't gotten any response. The murderers still remain free.

In March 1997, Zhang Dezhen was found to have hepatitis B during a physical examination at Yishui Normal School. After many kinds of treatments, her health did not get better at all. She was desperate.

Just when she lost all hope, one of her relatives introduced Falun Dafa to her. She acquired Master Li's lecture and exercise tapes and started to practice Falun Gong. Gradually her sickness completely disappeared. She understood that Master Li had saved her life. She made up her mind to cultivate the Fa and never give it up.

After the persecution started, in January 2000 Ms. Zhang went to Beijing to appeal for justice for Dafa. She was forcibly brought back to her hometown by the Mengyin County police and was detained for two months. During her detention, the CCP officials from the Jiuzhai Town insulted, verbally abused her and beat her brutally. They even forced her to sit out in the snow during her menstrual period as a means to torture her.

In April 2001, the Mengyin County 610 Office illegally sentenced Ms. Zhang to three years' forced labor and imprisoned her in the Jinan City Women Forced Labor Camp. Thirteen days later, she was released because she did not pass the physical examination. The principal of the Jiuzhai Middle School and others continued to monitor her and harass her under orders from the authorities. She had to leave the school and her hometown, but she still clarified the truth and validated the Fa. In October 2001, Ms. Zhang and other practitioners went to Beijing again to appeal for Dafa. Under Teacher's merciful protection, she returned home safely.

In late October 2001, Zhang Dezhen was arrested by the security guard from Xiaoxiezhuang Mine while sharing cultivation experiences with the local practitioners in Xintai. She was detained at the brainwashing center of the Mengyin County 610 Office for more than three months, where she suffered brutal torture. Even her sister who went to visit her was also detained for more than a month. Zhang Dezhen staged a hunger strike to protest the persecution and was force-fed by the guards many times. Her esophagus was injured by the feeding tube. Eventually, she could not take care of herself and her life was in great danger. Finally her family was allowed to take her back home. Since then, Ms. Zhang had to become homeless again in order to avoid the persecution.

In the span of three years, Zhang Dezhen suffered from countless tribulations and persecution by the CCP officials. Every time, she faced the test of life or death. Every time, she suffered unimaginable pain and sadness. But every tribulation made her all the more firmly believe in Dafa. Her firm belief in Dafa shook all the CCP officials. When Ms. Zhang was arrested at Daigu Town, all of her friends and family members hoped she would break through the CCP's evil den to reunite with her family and celebrate the coming Chinese New Year. But no one expected that the CCP officials had murdered her.

Her hometown people can never see her beautiful figure walking by the brook again. They cannot hear her happy voice and laughter at the peach garden again. Her colleagues and students can still recall the sweet sound of her voice while teaching. Every year when the Chinese New Year approaches, people cannot help remembering her and shedding tears for her.