At about 10:00 p.m. on March 24, 2009, Ding Yuhua (female), the head of the National Security Department, Hailin City Public Security Bureau, Heilongjiang Province, collaborated with Guan Jingwei (deputy head), police officer Jin Haizhu, and policemen from the Fourth Police Station, and broke into the house of a married couple, Falun Gong practitioners Mr. Jin Zongshan and Mrs. Yan Fengmei. They confiscated a computer and forcibly took away Jin Zongshan, Yan Fengmei and Yan Fengmei's brother-in-law, Meng Xianguo, who was visiting the couple. Jin Zongshan escaped from the Public Security Bureau, but was forced to become homeless in order to avoid being arrested again. He was unconscious when he was found by his family on May 15, 2009. He passed away on May 22, 2009. 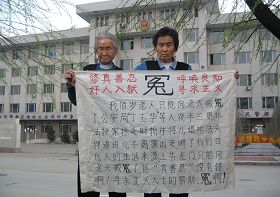 Yan Fengmei's mother-in-law, in her 70s (right), and Jin Zongshan's ninety-five-year-old grandma (left) were overcome with grief. Here, they protest the injustice with a banner, standing across the street from the Public Security Bureau.

Jin Zongshan was forty-six years old and was running a hair salon with his wife. His family includes his parents, who are almost eighty years old, his ninety-five-year-old grandmother and his daughter, who is studying out of town. The financial stability of the whole family almost completely depended on their hair salon. The couple's being persecuted has put the whole family into financial trouble.

Jin Zongshan's father became ill as soon as he heard the news that Jin Zongshan and his wife were forcibly taken away. The family did not dare to tell Jin Zongshan's daughter, who was studying out of town. The three elderly family members remaining at home had no idea where to get the tuition for Jin Zongshan's daughter for the next semester and how to financially support themselves in the future. With no other means to resort to, Jin Zongshan's mother and grandma had to go to the Public Security Bureau and ask for their release. They questioned Ding Yuhua as to why she searched their house, confiscated their property and forcibly took them away. Ding Yuhua told them it was because Jin Zongshan and Yan Fengmei practiced Falun Gong. The elderly people were puzzled and asked why it was wrong to practice Falun Gong and be a good person according to the principles of Truthfulness, Compassion and Forbearance. They explained that because of practicing Falun Gong, Yan Fengmei, who used to have to stay in bed without being able to take care of herself, recovered from all her illnesses. Jin Zongshan's illnesses, including stomach sickness and arthritis, also disappeared. Jin Zongshan's mother recovered from the asthma that she had suffered from for over thirty years. Jin Zongshan's grandma still remains healthy although she is almost one hundred years old.

On May 15, 2009, Jin Zongshan, who had remained homeless, was found by his family in an unconscious state. He was taken to a hospital and diagnosed as suffering from a cerebral hemorrhage. The doctors could not guarantee that he would survive an operation. The family asked to visit Yan Fengmei to discuss whether they should proceed with an operation for Jin Zongshan. Ding Yuhua did not believe them and asked to see the medical certificate. After seeing the medical certificate, she asked the doctor to talk with Yan Fengmei in the detention center. However the doctor declined, so she allowed the family to visit Yan Fengmei. Yan Fengmei asked to visit Jin Zongshan once before making a decision, and the family asked for Yan Fengmei's release so she could take care of Jin Zongshan. Ding Yuhua refused all of these requests and said it was impossible to release her.

On May 22, after an unsuccessful urgent rescue effort, Jin Zongshan passed away. Since the family found him, he had not spoken a word. In an open letter that Jin Zongshan wrote to Zhao Huajiang, the deputy head of the Hailin City Public Security Bureau, he said, "Under your direct order, your people forcibly broke into my house at midnight, searched and forcibly took away my property. That scene remained in my mind this entire past month and I was not able to let it go. The scene was horrific. My wife and I were both forcibly taken away. I was dazed then. Those gangsters stole my property, including a computer and an mp4. I kept asking those people, 'Why, what happened?' Nobody answered me. Those gangsters just kept rummaging through chests and cupboards and tore up the house."

One more young life has left us prematurely, one more child is at risk of having to leave school, one more happy family was ruined. This is just the tip of the iceberg when it comes to the crimes that the Chinese Communist Party has committed since they started to persecute Falun Gong.

“Mr. Zhang Hui Died in April as Result of Torture at Gongzhuling Prison in Jilin Province”